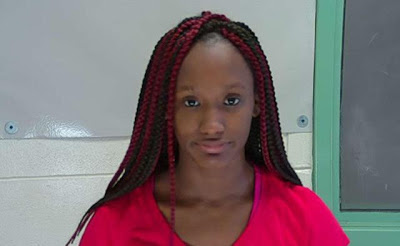 Saliva in a customer’s food: An 18-year-old girl, Sky Juliett Samuel is facing five years in jail after she allegedly licked and smeared her own menstrual blood on a cheeseburger before serving it to an unsuspecting customer at the fast food restaurant where she worked.

The incident occurred on January 7 at a Jack’s Family Restaurant in the town of Columbus. After a heated exchange where insults were traded with a female customer, Sky allegedly spread her bodily fluids on the burger, before handing it over at the drive-thru window around 10 pm.

A co-worker of Samuel’s later told her mother, Tabatha Hollins, who posted about the incident on her Facebook page, writing: “If u went to Jack’s between 10:00pm and 10:30pm on 1/7/2017 and u order the big jack with a sprite, u got more then ketchup!”

The customer saw the Facebook post and alerted Columbus police. An arrest warrant was issued and Samuel turned herself. She was arrested on felony charges of selling unwholesome bread or drink and later released on $5,000 bond. If convicted she could be sentenced to five years in prison.