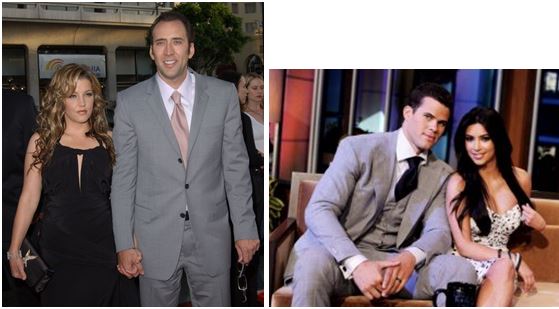 They were definitely an odd couple, so when Barrymore and Green tied the knot in July 2001, nobody really expected it to stand the test of time. That it didn’t, as divorce papers were filed by Christmas of the same year.

Elizabeth Taylor was no stranger to marriages and divorces (she had eight of ’em under her belt), but her first marriage was to hotel magnate (Paris and Nicky’s grandfather) Conrad “Nicky” Hilton when Taylor was only 18 years old. The pair had a lavish wedding, but the marriage only lasted 205 days of marriage—three months of which were spent cruising Europe. In the divorce proceedings, Taylor claimed  Hilton with verbally abusive, but later told LIFE magazine that her idea of wedded bliss had been “very naive.”