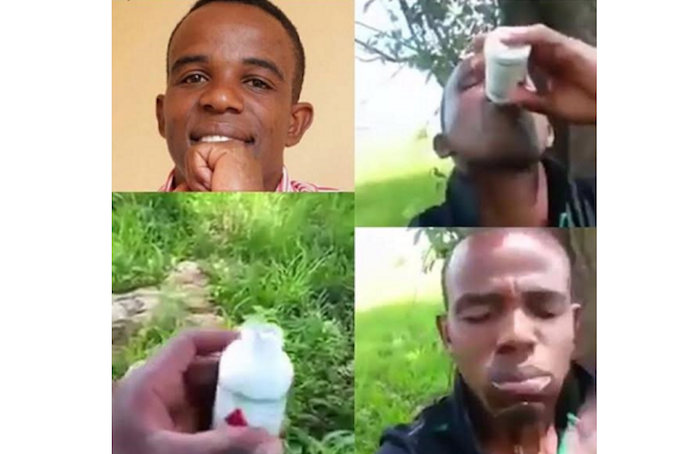 Streams himself committing suicide: A Zimbabwean gospel musician and pastor, Richard Nhika, 38, filmed himself as he committed suicide because of a conflict he had with his girlfriend, Nomatter. In the video, Richard can be seen in a bush in Goodhope, Westgate, Zimbabwe, holding onto a bottle as he spoke into the camera, his message directed at a woman believed to be his girlfriend.

“I will always love you Nomatter, which is why when I saw you I never insulted you or said anything bad. I have decided to die next to this tree so that everyone can see, this is real poison you can even see for yourself.”  He said before downing the contents of a bottle believed to be pesticide.

Spokespersons from the deceased’s family, Pauline Busu and Nyasha Nhika, expressed their shock at Richard’s action and revealed they never believed he could commit suicide due to his religious background. They also revealed that they do not know the girlfriend he mentioned but will like to meet her so that she can explain what happened and give them closure.

They said; “When we got to the scene where he committed suicide, we found the video in his phone which he had shot taking away his life.

“We are convinced that this was a spiritual attack that happened to him because in his normal senses, he would not have done something like this.

“He was a pastor at AFM Church and he was actually launching his album he featured Mathias Mhere, Dereck Mpofu and Sharon Manyonganise and no one ever expected him to do such a thing.”

Richard reportedly never gave his family cause to believe that he was going through a hard time, however, according to the accounts of the spokesperson, two days before his death he began waking up in the middle of the night to pray for long hours, but no one considered that out of place since he’s a pastor.

“He was fine, he never shared with us if he was facing any problems with anyone, we only heard of him mentioning a lady called Nomatter in his video,” Nyasha said.