Reminisce shuts down Lagos mainland with ‘The Street Party’ (Pics) 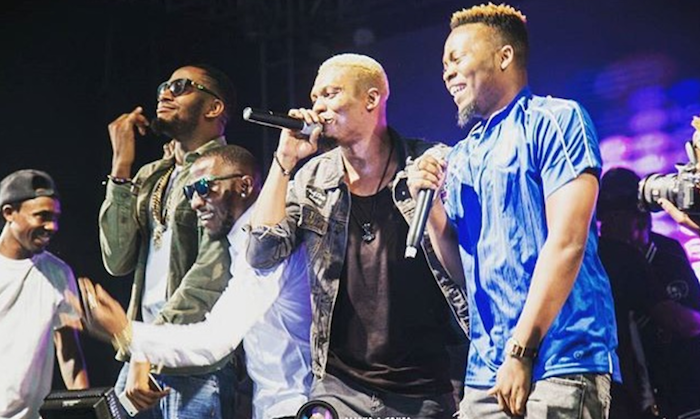 Reminisce Street Party: Self styled Indeginous rapper, Remilekun Khaled Safaru Aka Reminisce made it a night to remember for Music lovers in Lagos Mainland on Saturday, February 25, 2017 at the Ikeja City Mall, Lagos where the maiden edition of The Street Concert by Reminisce was staged. The music was heavy, wavy and loud as Reminisce and Industry friends made sure they gave back to the street that kept on supporting them all these years.

Just as expected, the show kicked off with the emerging acts who rocked the stage with their personal hit tracks, while some looked jittery, others were dimensional and took over the stage like they own it.

Then later came the man of the moment Reminisce in his first outing of the night which turned out awful due to poor sound quality. Even though Reminisce carried on like there’s nothing wrong, but the crowd obviously weren’t feeling the headlining act’s performance as there was no cheering sound as just some awkward silence from the audience was observed.

Then there was the launching of the new ‘Samsung Galaxy Grand Prime Plus’ limited edition which was coordinated by the ‘Alaga ibile’ himself together with some officials of the smartphone brand in which he is an ambassador of.

Other artists such as talented rapper Seriki who came out dripping in some Shiny Gold chains followed Eva Alordiah who gave a renowned performances of her songs ‘Deaf’ and ‘Kanayo’, before going into a swift inspiring mode where she took out time to lift and motivate the obviously surging crowd by telling them not to ever give up on their dreams no matter what life brings before them.

We later have other emerging acts such as the New school Fuji Trap and Hip-Hop act Terry Apala who gave a fair performance of his mini hit ‘Champagne showers’ and then we have Davido’s DMW new recruit, Yonda who performed his debut song ‘Las Vegas’ to the delight of those who can reckon with the song. His performance was followed by that of some decent acts such as Aquila records Baseone and Airboy, Capital Hill’s Mz Kiss, Ms. Chief, Chocolate City’s Ckay and Olawale of Project Fame and Comic act ‘Woliarole’ who all came out in turns to do what they know how to do best.

Reminisce came through with his second appearance of the night and was later joined by Seriki and Ola Dips for the performance of their hit street cypher ‘Feego’ and then came YBNL henchman, Olamide Baddosneh whose presence almost erupted the whole place with screams, cheers and shouts of his ever loyal street fans.

Reminisce left the stage for Olamide to take over after they’ve performed Reminisce’s ‘Local Rapper’ together. Baddo then later performed his hit records back to back from old to the new ones which of course includes the latest ‘Pepper dem Gang’ which brought his newly signed act ‘Davolee’ to the stage and had the fans cheering and vibing good to his songs. Davolee later performed his ‘Festival bar’ joint.

Reminisce came out for his third and final round of performance but couldn’t go on for long due to time challenge as it was already a few minutes to midnight, and that bring us to a temporary end of the show because we later have Oleku crooner, Ice Prince Zamani who came in late but made up swiftly by dazzling the fans with gifts and a decent performance that brought the show to a perfect conclusion.

All in all, The Street Concert by Reminisce was a decent attempt for a free show and one couldn’t help but wonder how more glamorous it could have been, had it been it was a paid event.