REVEALED! See how Dangote spends his billions : His fleet of cars, Jets, Houses, Boats and net worth (With Pics) 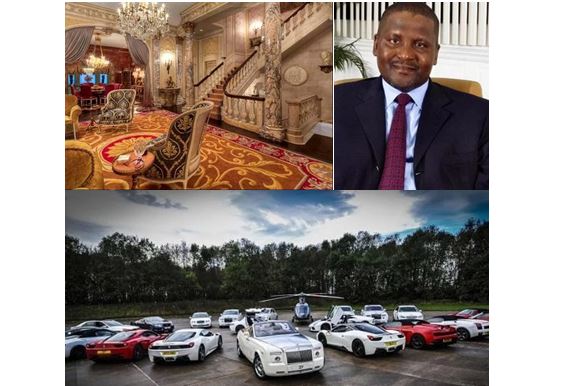 Aliko Dangote: The richest man in Africa, has experience in trading minerals, and production of cement but he is capable to convert cement into gold using his political weight. His business in addition to cement production includes such industries: flour, sugar, salt, oil and petrochemical industries. He works out to take the most profitable niches in Nigeria and start building an oil refinery, which should become the hugest on the continent.

Our rich-man is a grandson of Sanusi Dantata, a prosperous and authoritative citizen of city Kano. He played an important part in his grandson upbringing. From a young age, Sanusi Dantata attemped to wake the interest for marketing in the heart of his successor, and he had a huge success in this: his grandson grew into the richest man in Africa.

Once Aliko Dangote said, “I can remember when I was in primary school, I would go and buy cartons of sweets and I would start selling them just to make money. I was so interested in business, even at that time.”

The richest man in Nigeria started his path as a merchant, he reorganized his “Dangote Group” in a syndicate with concern in the sugar industry, wheat milling, salt extraction, cement production, fabric industry, real property, oil and natural gas. «Dangote Group», named after Dangote – giant syndicate in the West Africa. It controls a large part of the market of consumer goods in Nigeria. The company’s progress owes much to the political connections of its owner.