Sad story of Kenyan girl sent back from the US 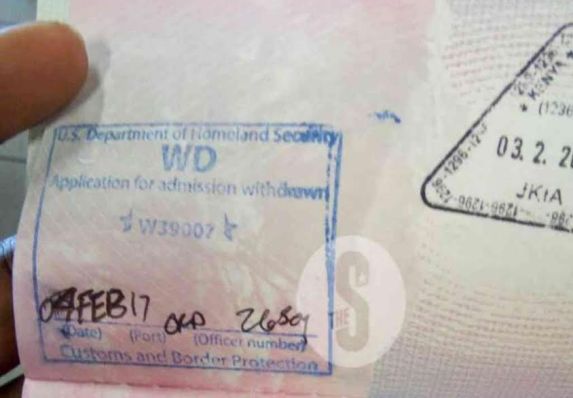 Sent back from the US: A Kenyan girl was denied entry into the United States just days after courts barred President Donald Trump from deporting immigrants. The girl identified as Ednah Chepkoton, was held at Chicago’s O’Hare International Airport for many hours after getting off a United Airlines flight on Saturday, February 4, 2017 The 25-year-old nursing graduate had been given a five-year multiple entry visa by the US embassy in Nairobi on Friday, January 20, 2017

Oct 17, 2020
Narrating to the sad experience to the Star, she said:
‘We landed at around 9.30 am but when I was clearing with the customs an immigration officer called me aside and started questioning me. I was so confused and terrified. It was my first trip out of Kenya, she said.
The officer then started checking her luggage and documents. He asked her why she was carrying her academic papers and if she did not plan to return to Kenya.
‘I told him I always travel with my papers and that I had a return ticket,” she said.
After the interrogations which took four hours, the officer demanded her cell phone
‘He asked for the password which I gave to him,’ she said, adding she was then asked to leave the office.
‘I went back to ask why my case was taking long because my flight was leaving. It was at that juncture that the officer, who was with a woman in uniform, told me he had two questions for me,’
She was asked to choose between being banned from the US for five years and having her visa withdrawn.
Ednah requested the officers to let her call her cousin. They refused.
Caught between a hard rock and a hard place, she chose the cancellation of her multiple entry visa. Her visa now bears a United States Homeland Security stamp withdrawing it.
Ednah was bundled into a return flight to Nairobi at around 6pm, more than eight hours after setting foot in the US.
‘I was really looking forward to my one-month stay in the US. We had spent a lot of money on air tickets. It is so sad that after all the vetting at the embassy in Nairobi I was humiliated this much.
Upon returning to Kenya, she, however, called the US embassy and was told to send her denial of entry letter.
-lib