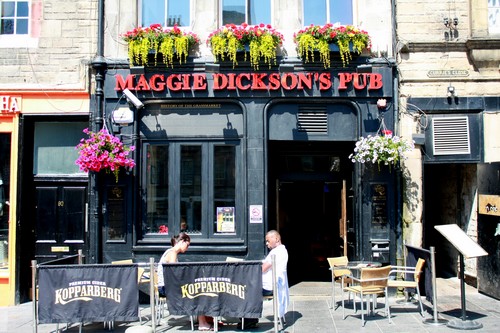 Like Anne Green, Maggie Dickson was convicted of infanticide of her own child that she had had through an affair with the Innkeeper’s son. She kept her pregnancy a secret. The baby was prematurely born and died within a few days. Unable to throw her dead child into the river, she left it on the riverbank. So the baby was discovered and the authorities traced it back to Maggie. Maggie was taken for public execution at the Grasssmarket. After her hanging the corpse was placed into the coffin but on the way to the graveyard she awoke up and started banging from inside the coffin. This strange happening was seen as God’s will and so she was freed.

Maggie Dickson is now hailed as a legend and is often referred to as Half-Hangit Maggie. There’s even is a pub named after her in the Grassmarket.