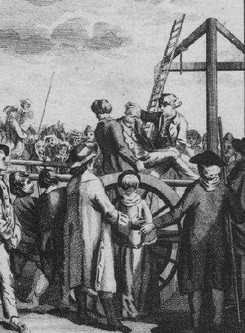 Samuel and his gang were charged of robbery and the murder of a policeman. When the news of Joseph Samuel hanging spread it attracted a large crowd who gathered at the execution spot. During the execution the cart on which he was standing drove off, but instead of dangling in air Samuel fell on the ground as the rope around his neck snapped. The crowd quivered and murmured among themselves. Another attempt was made hastily but this time, the rope slipped and got longer therefore Samuel’s legs touched the ground. People uproar in excitement. On the third attempt the rope snapped again. The crowd yelled for Samuel to be freed for they believed that it was a sign from God. The governor was sent for, who came and investigated and upon popular demand commuted Joseph Samuel’s sentence to life imprisonment.