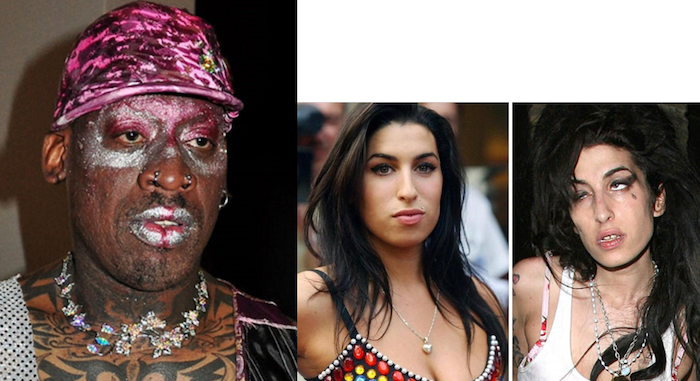 Born in New York in 1970, Earl Simmons is better known by his stage name DMX after launching his career as a beatboxer in 1988.

Recording his first demos and releasing his first singles a few years later, DMX stormed onto the scene by 1999 with the release of his solo album And Then There Was X featuring the hit single “Party Up (Up In Here).” Since then, he has expanded his talents as an actor with films like Romeo Must Die, Exit Wounds and Cradle 2 the Grave.

Much like Doherty, the 45-year-old DMX has a long list of problems that stem from his lifelong drug habit. With his first noted run-ins with the law occurring in 1998, DMX has spent the last 17 years in and out of jail for crimes including everything from reckless driving and assault to drug possession and animal cruelty. Incarcerated three times in 2010 and arrested four more times in 2013, DMX has obviously not learned his lesson because, as of December 2015, a warrant was out for his arrest after being sentenced to six months in jail for failure to pay child support. With 12 children, let’s hope they have a better role model than DMX. The NBA’s favorite bad boy complete with wild hair colors, tattoos and body piercings, Dennis “The Worm” Rodman made a name for himself on the court as one of the best rebounding forwards in NBA history.

Retiring from basketball in 2006, Rodman’s drug and alcohol addiction were publicized after he entered rehab in May 2008.

A year later, his problems escalated even further on national television when family and friends staged an intervention as he filmed Celebrity Apprentice. Finally agreeing to work with Dr. Drew on Celebrity Rehab, Rodman’s path to sobriety was short-lived. By January 2014, Rodman entered rehab once again after a highly publicized trip to North Korea during which his agent confirmed he had been drinking more than ever before.