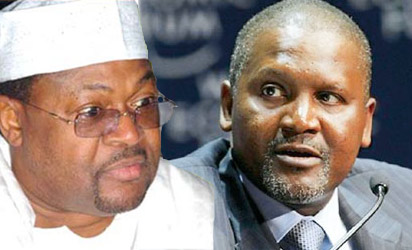 Aliko Dangote, Wale Adenuga’s net worth drops
: The President of the Dangote Group, Alhaji Aliko Dangote; and Chairman of Globacom, Dr. Mike Adenuga, saw their net worth declined by $3.2bn and $4.2bn, respectively in the past year, according to Forbes 2017 World’s Billionaires list. Dangote retained his position as Africa’s richest person in the latest ranking, with a fortune of $12.2bn, although he was ranked 105th as against 51st last year.

The Chairman of Forte Oil, Mr. Femi Otedola; and the Chairman/Chief Executive Officer, BUA Group, Abdulsamad Rabiu, were missing on the list. They were worth $1.8bn and $1.1bn, respectively last year.

In 2015, Otedola re-joined the list of African billionaires after a five-year hiatus, with a $1bn fortune.

The net worth of the Founder and Executive Chairman, Famfa Oil Limited, Mrs. Folorunsho Alakija, was unchanged at $1.6bn, coming in the 1,315th position, down from 1,121st last year.

Their total net worth rose by 18 per cent to a record $7.67tn, with the increase in the number of billionaires described as the biggest in the 31 years that Forbes has been tracking billionaires globally.

Bill Gates is the number one richest for the fourth year in a row, and the richest person in the world for 18 out of the past 23 years. He has a fortune of $86bn, up from $75bn last year.

Amazon’s Jeff Bezos had the best year of any person on the planet, adding $27.6bn to his fortune, and is now worth $72.8bn, moving into the top three in the world for the first time, up from number five a year ago.

Warren Buffett had the second-best year, and the biggest gain since Donald Trump was elected United States President in November 2016. His $14.8bn jump in 12 months was enough for him to grab back the number two spot from Amancio Ortega, founder of Spanish clothing chain, Zara.

Ortega’s fortune was up by $4.3bn since last year, but he still fell to fourth in the world, unable to keep up with the outsize gains of others.

The founder of Facebook, Mark Zuckerberg, moved up to number five for the first time, after his fortune rose by $11.4bn in 12 months.

Carlos Slim of Mexico fell to number six, the first time he’s been out of the top five in a dozen years.

President Trump saw his net worth decline by $1bn to $3.5bn. His position on the Forbes’ ranking dropping 220 spots, leaving him tied with 19 others as the 544th richest person in the world.

There were 195 newcomers, including 26-year-old John Collison, who is now the world’s youngest self-made billionaire, just two months younger than Snapchat’s Evan Spiegel.

There are 56 billionaires under age 40, down from 66 last year, after some aged out and others dropped below the $1bn mark.

The Forbes billionaires list is a snapshot of wealth taken on February 17, and stock prices and exchange rates from around the world were used to calculate their net worth.