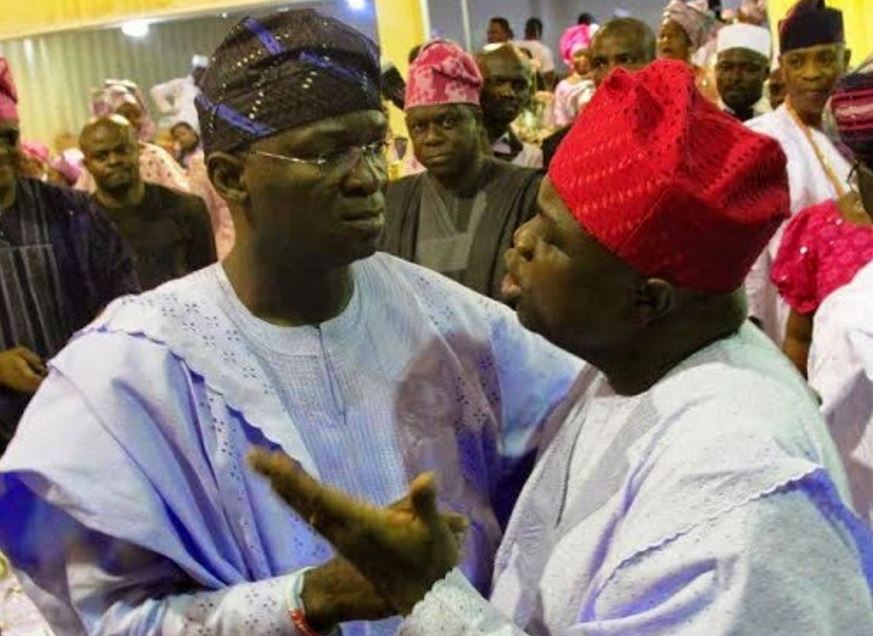 Fashola fires back at Ambode: Minister of Power, Works and Housing Babatunde Fashola yesterday denied frustrating the government of Lagos State’s efforts to rebuild the International Airport /Oshodi Road. This comes after Governor Akinwunmi Ambode spoke on Wednesday of his administration’s battle to rebuild the road, which he described as “a disgrace”. The Federal ministry of Works, he said, was frustrating the efforts to take over the all-important road.

Fashola said in a statement by his media aide, Hakeem Bello

“The allegations of lack of cooperation from the Ministry and frustration of Lagos State Government development initiatives are simply not true and the facts do not bear them out.

“In 2016, the Hon Minister for Power Works and Housing, Mr. Babatunde Raji Fashola, SAN, approved the use of the Federal Ministry of Works yard at Oworonsoki for Lagos State Government to create a lay-by to ease traffic.

“The Hon Minister also approved that Lagos State be granted the Rights to manage the Street Lighting on the 3rd Mainland Bridge to support the security initiatives of the State, a request which the previous Federal Government administration had denied Lagos State for years.

“During the same year, the Hon Minister also supported the approval of the World Bank Loan of $200m to Lagos State, again a request the previous administration had denied Lagos State.

“As far as International Airport Road which is currently the ground for alleged “frustration” is concerned, the correct position is that the Lagos State Government presented a request for four roads that it would wish to take over.

“This is consistent with the position being canvassed by the Hon Minisiter for states who are interested to apply to take over roads that are within their states.

“The Ministry has presented the Memorandum conveying the request of the Lagos State government to the Federal Executive Council as was done with a similar request by the Kaduna State government in 2016.

“Due to the fact that two of the roads also connect Ogun State, the Federal Executive Council could not reach an immediate decision on them because it requested the input of the other state government affected.

“The Kaduna State government requested the Federal Government to transfer two roads within Kaduna Metropolis to the state in November 2015. Due process was followed and the request of the state government was approved in August 2016, a period of ten months.

“Federal Executive Councill Memorandum are debated and commented upon by all members and in cases of roads, surveys, maps and other material have to be provided to assist members understand the location and connectivity of the roads, (in this case Four roads), in order to assist how they vote on the Memorandum.

“As far as the Presidential Lodge is concerned, it is under the management of the Presidency and not the Ministry.

“After the approval by Mr President that the Presidential Lodge be handed over to the State Government, there was a directive to the Ministry to work out the modalities for handing over.

“The ministry has prepared a vesting instrument to convey the transfer and all that is needed is a survey plan.
“The Presidential Lodge is a high security location and officials of the Ministry also require security clearance to enter in order to do any works.

“Access to the lodge is not under the control of the Ministry.The motive behind this public accusations must therefore be scrutinised coming barely a week after the governor spoke with the Honorable Minister, Mr Babatunde Fashola SAN on the outstanding requests of the State for several minutes and the Minister took time to explain the situation of things to the governor. (The first telephone conversation the governor has had with the minister since May 29, 2015).

“If there is any lack of co-operation it is on the part of the state government that has refused to acknowledge not to talk of approving the Ministry’s request for Land of the National Housing Programme in Lagos.

“The ministry is not frustrated by this lack of response and remains optimistic that a response will come from Lagos State.

“The ministry remains committed to serving the government and good people of Lagos and will treat all their requests on merit and in accordance with necessary due process as will be done to other states.

“As far as the refund of N51Billion is concerned, this is not a new item. Almost all if not all states have these claims and the Federal Ministry of Power Works and Housing has verified these claims.

“What is left is the process of raising the finance to pay the debt owed to the States.

“Those who are familiar with the workings of Government will attest to the fact that it is an intricate sequence of processses, consultation and collaboration.

“Equating processes to a lack of co-operation is therefore akin to creating a storm in a tea cup.”