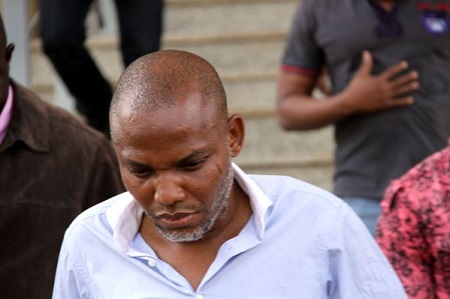 IPOB makes shocking allegation: The Indigenous People of Biafra (IPOB), on Wednesday, raised the alarm over the delayed and continued detention in Kuje Prison of its leader Mr. Nnamdi Kanu, saying it was a grand design to kill him.

According to The Sun News, the group alleged that Federal Government was deliberating delaying the release of its leader in order to perfect plans to kill him.

The group also frowned at attempts to try Kanu in secret and also apply the Sharia law in his case.

A statement by the Media and Publicity Secretary of IPOB, Mr. Emma Powerful, also alleged the Federal Government and her security agencies through the judiciary have perfected plans of the Justice Binta Nyako who literarily somersaulted from the initial judgment against the secret trial.

“The judiciary that supposed served to serve as the beacon where justice prevail and the last hope of the common man has turned themselves into mess and allowed themselves to be used to torment the country”.

“Again, we are all aware that two courts of competent jurisdiction had granted unconditional release of our leader Mazi Nnamdi Kanu”.

“With the judgment from justice Binta Nyako on the 20th March 2017, it proved to the entire world that Nigeria government have no evidence to prove their case against our leader Nnamdi Kanu,” Powerful stated.