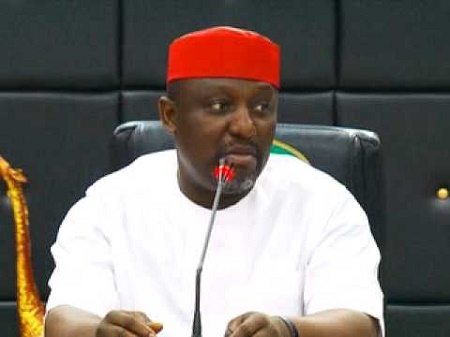 IPOB attacks Governor Okorocha: The Indigenous People of Biafra (IPOB) has attacked the Governor of Imo State Rochas Okoracha describing him as a liar. The group described as false, a statement credited to the Governor Rochas Okorocha of Imo State that Nnamdi Kanu, at a stage in his struggle, insulted Igbo leaders. The group said what was perceived as insult by some people about Kanu was that he was telling them “the bitter truth, they did not want to hear”.

In a statement made available in Awka, the Anambra State capital, by the IPOB Media and Publicity Secretary, Emma Powerful, the group said the reason people like the IMO State governor were propagating lies against Kanu was because IPOB had said that the All Progressives Congress under President Muhammadu Buhari had a mission to Islamise Nigeria.

Their press statement read in part “It is well known to everyone in Nigeria, both the government, that they don’t like to hear simple truth and other things that is eating deep into the contraption called Nigeria.

“Mazi Nnamdi Kanu propagates the truth to the whole world which people with good conscience around the globe understood and nicknamed him the prophet of our time because almost his teachings and prophecies on Radio Biafra have come to pass.

“He prophesied that the APC party led by Major General Muhammadu Buhari was coming to Islamise the country through their brothers in the guise of cattle rearers/herdsmen and that they would be getting support from their people in the Nigerian security agencies especially the soldiers who will protect them.

“Today, the islamisation agenda is ongoing in the country without any hindrance. Since the killing in Agatu Benue State, Uzouwani Enugu State, Southern Kaduna and the killing of unarmed peaceful members of IPOB, there was no official pronouncement against the killings from Nigeria government and APC.

“These murderous agents in the guise of cattle rearers in every part of the country killing people, raping women and girls and destroying farmland everyday without any arrest proves Mazi Nnamdi kanu rights and also proves that they are being supported by the government in power.

“That was what IPOB leader Mazi Nnamdi Kanu preached against not what some politicians understood”.

The group described as unfortunate that politicians, like Okorocha, could not see beyond their eyeglasses the hidden agenda “in the contraption called Nigeria”.

The group maintained that the best thing that could happen to Nigeria now was to allow those desirous to have their own sovereignties to go their ways.