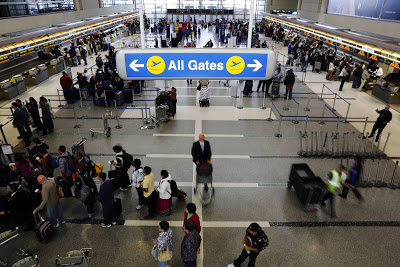 On Monday March 6th, Senior Special Assistant to President Buhari on Diaspora matters, Abike Dabiri-Erewa, released a statement advising Nigerians who do not have any important thing to do in the US not to travel there as she has received reports of some Nigerians being denied entry by some US Immigration officers. Her advise was later countered by the Minister of Foreign Affairs, Geoffrey Onyeama who at a press briefing in Abuja, said there was no truth in reports that some Nigerians are being denied entry into the US due to the new US immigration policy…

A Nigerian man, Femi Olaniyi, has come out to share a story of how he was denied entry into the US, locked up in a cell for four days and then flown back to Nigeria in February. Olaniyi who spoke with Punch said he obtained his visa from the US Consulate in Lagos on December 23rd last year and planned to go on holiday with his wife to the US but she couldn’t make it due to official engagements.

According to him, he had planned to spend some days in California and visit a family in Indianapolis. He said he had made hotel reservations of about $300 cash and also had $3,000 on his visa gold. Olaniyi said he departed Lagos on a Turkish Airline on February 21st and on getting to the Los Angeles Airport, an immigration officer pulled him out and inquired from him his reason for visiting the US. He said while he was giving an explanation, the officer pulled out his phone and travel documents and then captured his biometric data.

“He demanded my phone which I gave to him. He went inside an office with the telephone and documents and later checked my luggage. He asked about my family which I told him. He later said he wanted my biometrics. He then asked me to sign some documents, but as I attempted to read them, he got angry and he handcuffed me and locked me in a cold cell, but after some minutes, I banged on the door and told him that the cell was too cold for me, so he moved me to another cell. I was in that cell for four days before he released me and sent me back to Nigeria. I arrived on February 21st and was locked in the cell and released on February 25th, when I was placed on a plane back to Nigeria. Up till now, I don’t know the offence I committed that warranted my being treated like a criminal. I have travelled to other countries and have never experienced this kind of treatment. I told them to charge me to court but they said no, that I was not entitled to court hearing. They revoked my visa and banned me from visiting the US for five years. This was written on my passport, for an offence I know nothing about. My visa was to expire next year”.

‘What Abike (Dabiri-Erewa) said is true, I am a living witness. This incident cost me close to a million naira and we are not even talking of the damage done to my reputation through the revocation of my visa and the five-year ban on me. If I take my passport to any embassy, they would think l committed a terrible offence. They detained and treated me like a criminal. The Federal Government should address this issue. It is very unfortunate”he said

Another Nigerian man Popoola Olayemi, a banker, whose wife was due to give birth in the US, also shared on how his visa with that of his wife and two children were cancelled in Abu Dhabi. They had planned to take a connecting flight to New York from Abu Dhabi but they were denied permission and flown back to Lagos. Popoola says that the immigration officials initially said the $8,000 he had on him was not sufficient for him and his family. After convincing them that he had friends who could raise money for him if the need arose, Olayemi explained that the officials asked him to go back home and return to the US after his wife might have had her baby.

“The officer appeared to dial a number on his telephone, though I am not sure he talked to anyone, he said we didn’t make a hotel reservation but I showed him the hotel confirmation code. I showed them the printout, but he said he had called the hotel and they said there was no reservation. He then insisted that I should re-book my hotel accommodation but there was no telephone service at the airport. I couldn’t make phone calls. My children were crying. Nobody attended to us. We were kept there for over two hours. He harassed me and then gave my wife a form to fill. Later, they showed me a form, containing passengers they cleared, saying some declared $15,000 and others $20,000. He said this was a lesson for me and that next time I’m visiting the US, I should fly directly to New York and not stop over. He later gave me a questionnaire to fill, but the form has only one answer to every question, so you can’t tick ‘no’ to any question even if the answer is no. So, I was forced to tick ‘yes’ to all the questions: that I did not go with enough money; that I did not make hotel reservation, and so on. My passport was seized and that of my wife. After some hours, they handed us over to Etihad Airline crew and we were asked to sit down somewhere. Nobody attended to us for about an hour or two. The children were shivering and they had to sleep on a blanket on the floor. I later met their overall boss, who gave us tickets for lunch and dinner, they didn’t even tell us they were taking us back to Nigeria. It was when I got to Lagos that I saw that my visa had been cancelled. The immigration officer was telling my wife to go home and have her baby and that she should come to the US after having her baby.”

According to Popoola, one of the immigration officers was a US citizen of Nigerian parentage. “They are US border protection agents. One of them is a black American with an Igbo name, Ogbonnaya,” he stated, adding that another Nigerian was also denied entry to the US “on account of his luggage.”

Reacting to the statement by the Federal Government that no Nigerian was denied entry to the US, Popoola who spoke angrily, said

“I’m sorry to say, but the man (foreign affairs minister) didn’t know what he was saying. He ought to investigate first before addressing a press conference. They just wanted to sweep the issue under the carpet, but this is not fair or right”.