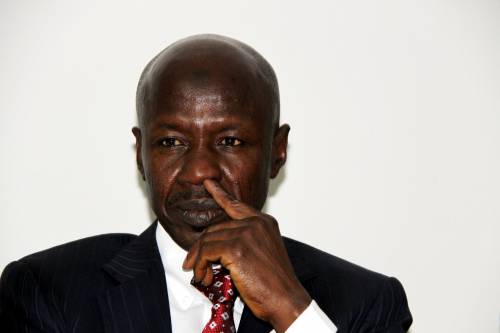 Nigerian senate rejects Magu: The Nigerian Senate has rejected the nomination and confirmation of Ibrahim Magu as chairman of the Economic and Financial Crimes Commission, EFCC. In a majority decision during plenary on Wednesday, the Senate upheld its earlier decision not to confirm Magu as substantive head of the anti-graft agency.

Announcing his rejection, Senate President Bukola Saraki warned that the integrity of the EFCC must be protested notwithstanding.

”We should not rubbish the entire institution because of an individual,” he said.

Following the decision of the Red Chamber, Senator Dino Melaye (APC, Kogi West) called for the immediate replacement of Magu by the most senior officer of the commission.

The Department of State Security, DSS, yesterday night sent out a letter to members of the senate, stating that acting chairman of EFCC, Ibrahim Magu who was rejected by senators today, failed the integrity test carried out on him by the agency. In the report, the agency said it carried out investigations on all the nominees for the board of the EFCC.

It cleared all other nominees except Magu who they raised a red flag on.

They alleged he lived a high profile lifestyle and flies first class which is against President Buhari’s directive that no public officer should fly first class. The report alleged that Magu kept close company with persons with questionable characters.

It will be recalled that the Senate last December rejected Magu’s confirmation on the job following a security report submitted to it by the Department of State Security, DSS.

Having declined his nomination, the Senate proceeded to return him to President Muhammadu Buhari for reconsideration, sparking a furore in the polity.

But the president sent his name to the Senate for a second time, along with a lobbying team put in place to ensure he was confirmed.

President Buhari had reportedly acted on intelligence reports from the international community persuading him that Magu was the best candidate to lead the ongoing anti-corruption war.

But even that proved insufficient as the Senate overwhelmingly voted to deny his confirmation as the nation’s anti-corruption czar.

#BBNaija: I will kill my husband if he beats me – Former housemate Ese