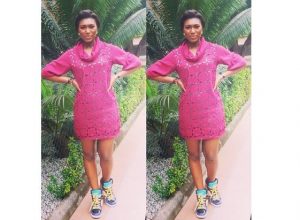 Nollywood actress, Ufuoma McDermott revealed that she was reluctant to act in Omoni Oboli’s ‘Okafor’s Law’ at first.

Speaking with BB Media, Ufuoma said; ‘It was tricky for me because I’m very much of a prude,”

I wasn’t so sure but Omoni kept telling me “Trust me, trust the process” and eventually I had to let go and let myself fully into the production and at the end of the day, what we got is nothing short of an amazing production.” “Omoni allows you as an actor to bring something to the table and that is something I find refreshing”, she adds.

On the law and its authenticity, McDermott said, “too many people have different experiences in life. To each his own. I cannot say that because it hasn’t happened to me, it doesn’t exist. The question we need to ask is, does it happen? Yes. Does it happen to everyone? No.”