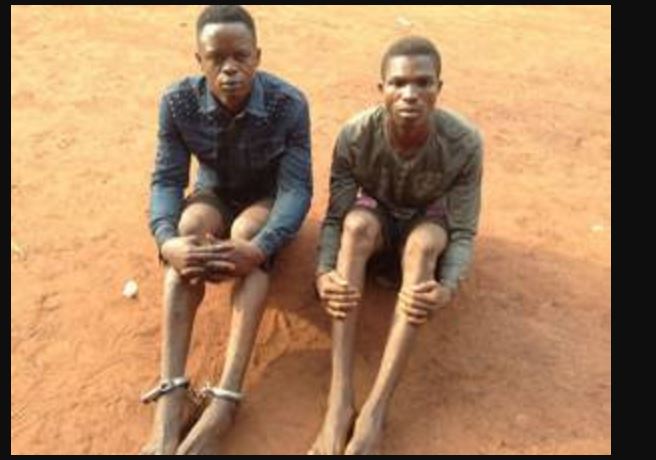 Forest where kidnappers bury bodies
: The police in Enugu have discovered a shallow grave where the remains of the former Chief Security Officer for Uzo-Uwani Local Government Area of the state, Mr Ejiofor Enechi, and others were buried after being killed by daredevil kidnappers.

According to Vanguard, the shocking discovery was made on March 15, 2017, at the Aniocha Forest, Nimbo local government, after two top members of the kidnap gang – Chijioke Ozor alias Earthquake and one Anselem Ngana – were nabbed following a fierce gun battle with members of the police anti- kidnap gang who trailed the suspects to their hideout.

It was discovered that the two kingpins were members of the banned Oda Nimbo Vigilante Group in the area who had been involved in the kidnap of over 20 persons along the Nsukka- Uzo-Uwani – Onitsha road.

About 30 other members of the dreaded group are being hunted by security agents following the gruesome murder of Ejiofor after his relatives had paid N2 million ransom for his release.

Confirming the arrest, Enugu State Police Public Relations Officer, PPRO, Superintendent Ebere Amaraizu, said that Earthquake led the police to the shallow grave in the forest where the remains were exhumed.

“Our detectives discovered the shallow grave and the shrine where the gangsters took their victims to at the Aniocha Forest which stretches to Eshi River in Kogi State.

Apart from Ejiofor’s remains, they found several motorcycles of other victims who must have been killed by same members of the vigilante group.

Each time they kidnapped their victims, they blamed the action on Fulani herdsmen but it is now clear that the allegations against the Fulani herdsmen were diversionary,”

“The forest is popularly known as Malaysia or Ugbo Ekwuru behind the Ugwuijoro Village in Nimbo. Anselem Ngana is from Akpama Nimbo and he was one of those in charge of monitoring Ejifor’s movements for other members of Oda Nimbo Vigilante group.

Earthquake was among those who took him to the bush where he was allegedly murdered instead of the shrine.

Over 30 members of the killer gang are still on the run and we are on their hot chase.”

Update: See the amount the second woman was stopped from jumping into Lagos lagoon is owing