Story of Shina Rambo, Nigeria’s most notorious armed robber who turned pastor – See how he slept with his mother to gain spiritual powers 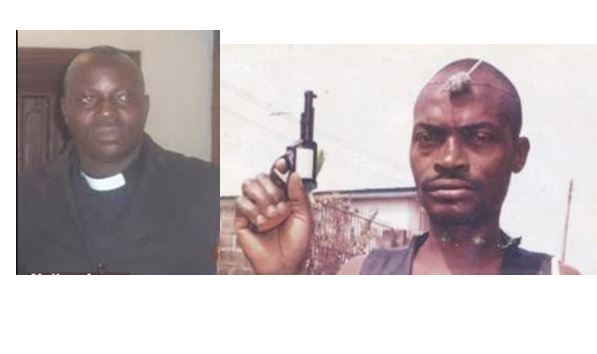 HOW IT ALL STARTED

”Shina was already indoctrinated into the underworld by his father at a tender age of 7 without him knowing it, as he would sit in front of his son, to dismantle and assemble all sorts of weapons and then polishing them in preparation for an operation.

This went on for so long till one day, little Shina, entered into his father’s room while he had stepped into the toilet, and saw a dismembered gun on the floor. He sat down in front of it, and bit by bit, he had assembled it effortlessly in no time at all. His father came out of the toilet, and saw his son, with a loaded gun in his hands.

Shina Rambo became so notorious in no time, and was hell
bent on succeeding in his career as an armed robber, that he went through any length to secure spiritual powers for fortification.

To the extent of pounding over 27 live new born babies in the mortar with a pestle, cutting off about 100 human tongues and cooking them to eat, visiting the spiritual river called river of life in Ogoja, Cross Rivers State, living in an Iroko tree for days, and sleeping in the cemetery.

He was given a spiritual wife who always followed him for any operation, she dressed like an Alhaja, people thought she was human, but she was a spirit, that was why they never saw her face. He said she was his personal driver, that she could drive from Nigeria to Cotonou, in the speed of light.