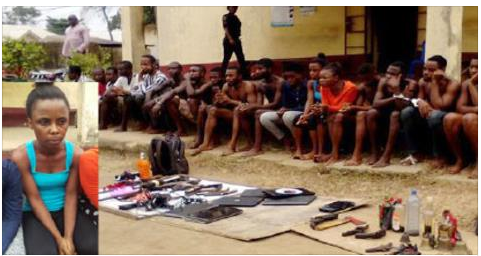 Young lady arrested for keeping guns: 25-year-old Ms. Hope Usang, has been arrested after being linked to arms leased out to robbers in Cross River State. The female armourer was arrested alongside 21 others by the Cross River State Police Command, after a robbery victim, Paschal Bisong of Ekpeyong Effiok street in Calabar Municipality, laid a complaint.

The Cross River State Police Commissioner, Hafiz Inuwa, who spoke to newsmen said his men swung into action immediately, arresting Emmanuel Edet-Etim and Idoreyin Usa, who confessed they got their arms from Usang.

“In our efforts to build a safe Cross River, we must not tolerate any form of arms proliferation. On February 24, following a report by one Paschal Bisong of a robbery attack, my men swung into action, leading to the arrest of two suspects, Emmanuel Edet-Etim and Idoreyin Usa.

“The suspects confessed that one Hope Usang supplied them with arms for the robbery. When my men stormed Usang’s house, they recovered three revolvers, four rounds of ammunition, one pistol, one locally-made pistol among others” he said.

Usang, who spoke to a Vanguard correspondent, claimed the gun belonged to her boyfriend who is a student;

“The guns belong to my boyfriend, a student. I never knew that he was keeping some guns in my house.”

However when asked to name her boyfriend, she refused.

The State’s Police Commissioner further disclosed that the arrested suspects will be charged to court for robbery, rape, kidnapping, murder, cultism, illegal possession of fire arms among others.