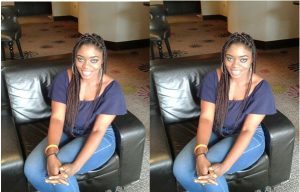 Bisola who emerged first runner-up in the just concluded Big Brother Naija Show is in the country and has begun her media tour.

In an earlier video which emerged yesterday, she had said she was slightly by betrayed by TTT as he didn’t tell her he was married.

Bisola also known as Miss versatile didnt fail to show she wasnt happy by his actions when she finally met the remaining housemates later in the day.

While she hugged the others, she curved TTT by saying “Weh done Sir’ which was more like shading him.