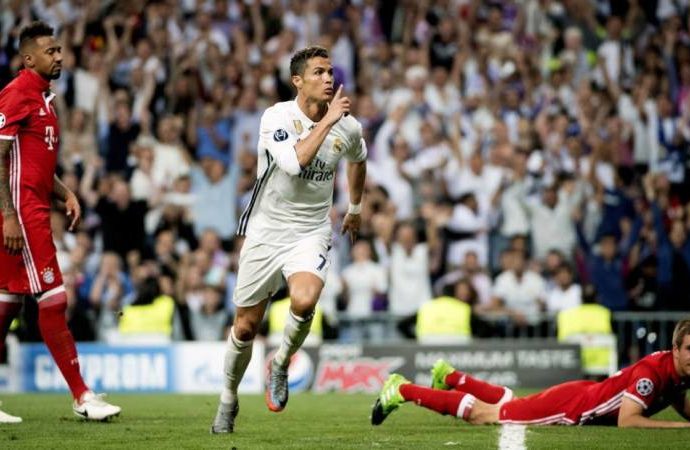 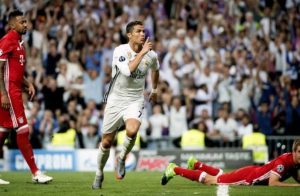 Cristiano Ronaldo scored twice in extra time to complete a hat trick and take his career Champions League goal tally to an even 100 as Real Madrid advanced to the semifinals over 10-man Bayern Munich on Tuesday.

Ronaldo found the breakthrough in the extra period with his second goal of the game — though he appeared to be offside — before adding a third to seal a 4-2 second-leg win, 6-3 on aggregate.

Robert Lewandowski had opened the scoring in the second leg with a penalty early in the second half, and though Ronaldo scored his first for Madrid, his header was immediately followed by a Sergio Ramos own goal that levelled the aggregate score and sent the tie to an extra period.

Bayern started the game on the front foot and nearly went ahead in the ninth minute when Thiago had his shot blocked and Arjen Robben could only put the rebound in the side-netting.

But Real Madrid recovered and controlled the rest of the first half, though they couldn’t build on their first-leg lead.

Karim Benzema sent a header wide midway through the first period, before Dani Carvajal unleashed a long shot that produced a phenomenal diving save from Manuel Neuer, though the referee gave a goal kick rather than a corner.

Two minutes later, Bayern’s Jerome Boateng was needed to clear Ramos’ strike off the line, and then Toni Kroos skied a open shot in the box over the bar.

Ronaldo got in on the action on 36 minutes on a counter and could have attempted to square for Benzema, but instead saw his shot smothered by Neuer. The Portuguese star then had another opportunity just before half-time but blasted high and wide.

When play resumed, Arturo Vidal, who had been booked in the sixth minute, was perhaps fortunate not to see a second yellow for a foul on Casemiro, and the play eventually led to Isco firing inches wide of the post from distance.

Bayern finally came to life as Robben put a header on target, only for Marcelo to clear it off the line.

But moments later the Dutch forward went down under a Casemiro challenge, the penalty was given, and Lewandowski converted from the spot.

The score was level 2-2 on aggregate, though Madrid still led on away goals — an advantage Vidal nearly erased with a volley in the 55th minute, but he could not keep his attempt on target.

Real Madrid boss Zinedine Zidane brought off Benzema and Isco for Marco Asensio and Lucas Vazquez, while his Bayern counterpart threw on Douglas Costa for Franck Ribery and Thomas Muller for Xabi Alonso in an attempt to find a way back into the tie.

However, it was Madrid who scored the next goal as Ronaldo got in behind Boateng to send a header past Neuer.

But scarcely could Madrid take a breath before Bayern were back fully level. Ramos tapped the ball back toward his own goal and it crept over the line past a diving Keylor Navas for an unlikely equaliser.

A pair of controversial decisions followed. First Casemiro fouled Robben at the edge of the penalty box but was not given a second yellow, and three minutes later Vidal was sent off for a challenge on Asensio.

Bayern made their final change before the game went to extra time as Joshua Kimmich came on for Lewandowski.

Madrid tried to make their man-advantage count In the extra session, as an early penalty shout was waved away as Casemiro collided with Boateng, and Asensio forced a near-post save from Neuer.

But just before the second period of extra time, Ronaldo received a cross in the box from Ramos, and though he appeared to be offside, the goal was given after he spun and fired his shot into the back of the net.

Bayern’s fatigue was apparent as Marcelo danced around Kimmich, then laid the ball off for Ronaldo to tap home, completing his hat trick with a landmark goal.

If there was any doubt left to the result, Asensio ended if by running into the box and beating Neuer for Madrid’s fourth on the night.