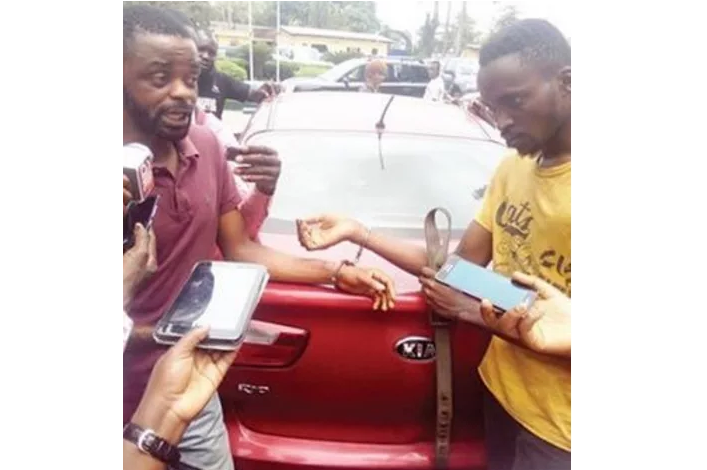 Two men arrested for strangling Uber Driver: Two members of a 3-man gang, who posed as prospective passengers to kill an Uber driver have been arrested by the police in Lagos State. The two suspects are Osaro Egbomrewen and Michael Eyeoekpe.

The suspect had reportedly chartered a Uber Kia Rio saloon car driven Iniovosa Emmanuel Alex from Ogba to Oke Ira of the state. The duo suspect and a certain Destiny, who is on the run, had told the driver to take them to Obawole area of Fagba, where he was killed. .

Police investigations revealed that the suspects used a belt to strangulate the driver to death, dumped his remains at Ogba, and drove his vehicle to Edo State. .

One of the suspects, Egbomrewen, 31, said, “Around 9:30p.m, we called the Uber driver to come pick us at Tantalizer eatery at Ogba, I and Destiny were inside the vehicle with the driver, but Michael was outside.”

I was holding the belt, immediately I put the belt across the driver’s neck, Destiny dragged the belt and we strangled him. We took his corpse to Oremeji Street and dumped him in front of a church around 10:30pm.

We took the vehicle to Michael’s boss to sell the vehicle and he enquired on how we got it but when we told him that we killed the owner, he said we should take the car away.

Michael said we should take it (the vehicle) to his house and park it outside before taking it to another buyer in Benin, where we were tracked to and arrested.”

Malabu oil deal scandal: Some people are threatened by my international profile – Jonathan