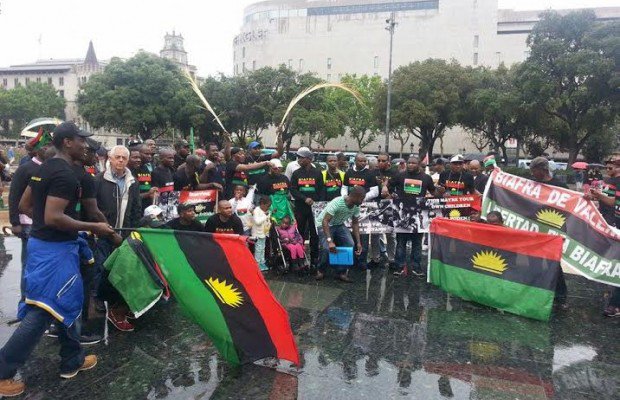 No movement in Biafra: The Indigenous People of Biafra (IPOB), Sunday insisted that there was no going back on the May 30, sit-at-home order for the 50th anniversary of the declaration of the Independent State of Biafra. IPOB stated that all Biafrans, no matter the states they were located, must honour and remember the heroes and heroines of the 1967 to 1970 Nigeria-Biafra war. In a statement by the Media and Publicity Secretary of IPOB, Emma Powerful, the group said while there would be no human and vehicular movement in Biafra land, Biafrans in Diaspora would take to the streets of their respective countries of residents around in peaceful procession.

“We, members of IPOB and our leadership worldwide would like to restate once again to the people of Biafra that all the states in Biafran land, must shut down on May 30, 2017 in honour and remembrance of heroes and heroines who laid down their lives during the genocidal war against the people of Biafra between 1967 and 1970.

“The people of Otukpo, Idoma and Igede in Benue State, Igala in Kogi State, Igbanke in Edo State, Calaber, Yanegua, Warri, Uyo, Lagos, Kano, Kaduna, Abuja etc, will shut down on that day for the 50th anniversary of the declaration by Dim Chukwuemeka Odumegwu Ojukwu and his second in command, late Major General Philip Effiong of the Independent State of Biafra on May 30, 1967.

“Also, those who paid ultimate sacrifice in the battle field and protests in our land that this present generation might live will be honoured and remembered, including those massacred in Asaba in 1968.
“They will be honoured with a two-minute silence at 12 noon.

“We expect every man, woman, child and businesses to observe this great annual event by staying at home and never involve in any business activity on that day.

“There will be no movement in Biafra land both human and vehicular while Biafrans in diaspora will take to the streets of their respective countries of residents around the globe.

“That will be the least we can do to show them and God Almighty ‘Chukwu Okike Abiama’ that this generation of IPOB and those to come will remain indebted to them that gave their lives to stop the elimination of Biafrans from the face of the earth.”
The statement further said special prayers would be offered in Okikirka Grammar School in Ijawland, the home town of late Chief Frank Opigo “who, by the divine inspiration advised the supreme leader and Commander in Chief of the Biafran Armed Forces, Dim Chukwuemeka Odumegwu Ojukwu and members of Eastern Consultative Assembly that our God given name is Biafra.

“Holy men and women will pray at the ancient and spiritual sites of Arochukwu and Enugu on that day,” he revealed.

Nnamdi Kanu not taken away by the military, he’s in London right now – Orji Kalu

We don’t see IPOB as terrorist organisation – US Government