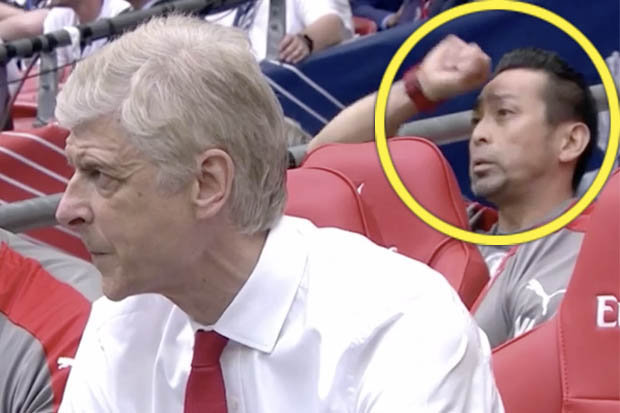 An Arsenal staff member went viral for pulling a rude gesture behind Arsene Wenger during the FA Cup final win over Chelsea. Goals from Alexis Sanchez and Aaron Ramsey were enough to secure a 2-1 win for the Gunners and ease the pressure on under-fire boss Wenger. But an unlikely figure grabbed the headlines during the match after cameras spotted him doing something bizarre in the Arsenal dug-out.

Takahiro Yamamoto – the North London side’s “soft tissue therapist” – was spotted banging his clenched fist against his forehead. The result was what looked like an explicit signal and it was made worse given he was sitting a few rows behind the manager. Betting company Paddy Power uploaded the moment to Twitter yesterday evening (May 27), captioning it: “When you see a d***head and you really want him to know that you think he’s a d***head.”

It soon went viral with more than 300 retweets, with viewers commenting: “Glad I’m not the only person who saw that.”

False News: Hotel cleaner who stole millionaire’s sperm from a used condom gets $2million for child support – A Retraction