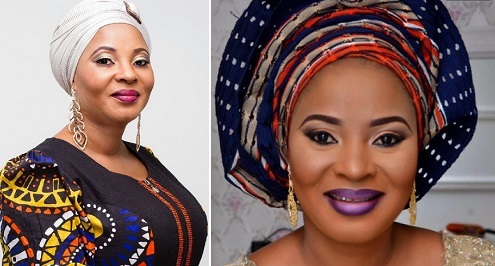 Cause of Moji Olaiya’s death: Distraught, distressed, dismayed were the words that could best describe the looks on the faces of many visitors who flooded the Magodo residence of Nollywood actress, Moji Olaiya. Her elder brother Otunba Olaiya who spoke to NET said the Moji’s death was most unexpected. ‘When I spoke to her a few days ago, she did not give signs of death. She never complained about anything. This is really heartbreaking’, he said.

Olaiya’s housekeeper Mrs Keji, who described herself as a very close friend of the deceased revealed details of the actress’s sudden death to us.

According to her, in the last three days before she passed away; the actress had placed several calls from her base in Canada to complain of ‘being uncomfortable’.

‘Her baby was born premature- her EDD was for May 2017 but  complications arose that necessitated that she be induced to save the baby’s life as well as hers. But since the delivery in March, her health had not been exactly perfect’.

Mrs Keji further exclusively informed us that around 10pm local time (3am Nigerian time) she went into a crisis. ‘Her blood pressure shot up and she got unconscious. An ambulance was called to transport her to the hospital. But her case worsened and she gave up the ghost before the could make it to the hospital.’

Keji who could not hold back tears continued, ‘Moji could not say goodbye to us, she didn’t let us hold her baby, where will her mother start from? Her death came too early, I believe this was not ordinary. This looks like a spiritual attack.’

Her 20- year old daughter, Adunola was visibly hysterical and had to be held back by friends who were around to console her. The [email protected] University student was then taken into an inner room as her screams continued to be heard.

Moji Olaiya’s infant daughter however is said to be in care of her friend with whom she was staying in Canada. It is unsure what will happen to the two month old. Olaiya’s relationship with the father of the child, simply called ‘Mr Femi’ is hazy as there as insinuations that he is still married to someone else.

The 42 year old’s death almost exactly two years to the death of her younger brother Abidemi Olaiya who died on May 4 2015.

Her elder brother Otunba, however told us that the family had not informed their patriarch, renowned highlife muscian Dr Victor Olaiya.

‘As you know, Baba is old and it is never a good thing for children to die before their parents. We do not know how he will take it. We have to be really careful, but we are going to his Aguda residence later this evening,’ he said. (NET)