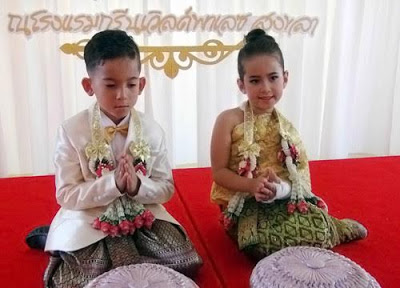 Twins that got married: Two six year old twins with Thai and Italian parents married in a ceremony in Songkhla in the south of Thailand on May 4th, 2017.

According to Indian local beliefs, the practice will bring good luck to both them and the family, ensuring they will always be together and have a long and happy life.

Tying the knot were groom Peno Vincent Curotto, the younger of the two six year olds, and his  bride Cara Francis.

Parents Joseph Curotto from Italy and mother Pornsri Wijitsopha joined many guests at the wedding that had all the trappings of a real marriage complete with dowry.