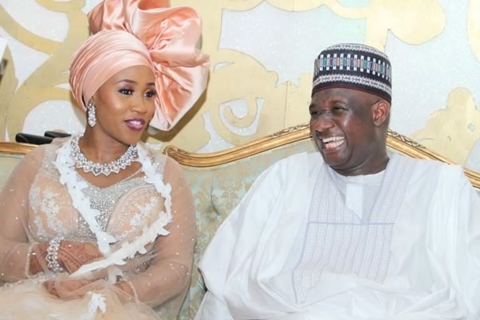 Halima Babangida’s wedding: Here are three powerful lessons from former military president’s daughter, Halimat Babangida’s traditional wedding, why soft drinks were not served.  We reported over the past weekend that Gen. Ibrahim Badamosi Babangida (rtd) gave out his last daughter, Halimat, in marriage to Gombe state businessman, Alhaji Auwal Lawal Abdullahi, in a high society traditional wedding held at the Hilltop Villa of the former military president in Minna, the Niger State capital.

The 3-day event drew attention for many reasons. While many focused on the number of private jets, hired or owned, that landed on the Minna airport tamarc just for the wedding, many others were more interested in the politics of people from different political camps sitting together on a table and even exchanging banters.

According to an exclusive report by Abuja Reporters, here are three lessons that was deducted from the wedding.
1. It was the first time in a wedding of that magnitude that bottled drinks were not served. Neither Coca cola nor Pepsi or other soft drink products were served during the event.  The development left many wondering why would a wedding of that calibre not have drinks like Sprite, Fanta, Coke, Pepsi or even Malt drinks.

It was gathered that the financiers set out to put forward a message that there are many more local drinks that are beneficial to the body than coca cola or Pepsi products or even the malt products.
Guests were served with chilled zobo, various forms of Kunu, there were also straight juice drinks, like pineapple, ginger, and some mixed together in cocktails. For those who liked to experiment with new things, they must have been overwhelmed by the number of drinks that were seemed in gourds.

How many children does she have? Here is all you need to know about Omotola Jalade Ekeinde’s children (Photos)