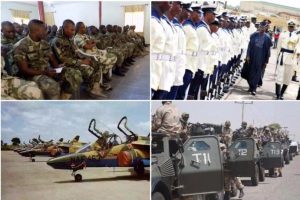 The military forces are essential for every country. They have different functions and often divided into three parts – army, navy and air force. Knowing the rankings and symbols of the forces is necessary whether you want to become a part of the military or just to understand the role of the army in general.

What is military in Nigeria?

Before discussing the army ranks, it is important to know what the military is and its primary task. The military is the armed forces. The military is authorized to apply deadly force and weapons in order to protect the interests of the state and its citizens. It has to defend the citizens and the country in case of threat or declared war from another country. The military also may have other other functions in the country, for example:

– Controlling the population within the country;

– Taking part in case of an emergency;

Prev post1 of 6Next
Use your ← → (arrow) keys to browse
Tags: armycountdownmillitayphotos
Share12Tweet8Pin3SendShare