Could this guy be the actual reason 2face fired Dammy Krane? (photos) 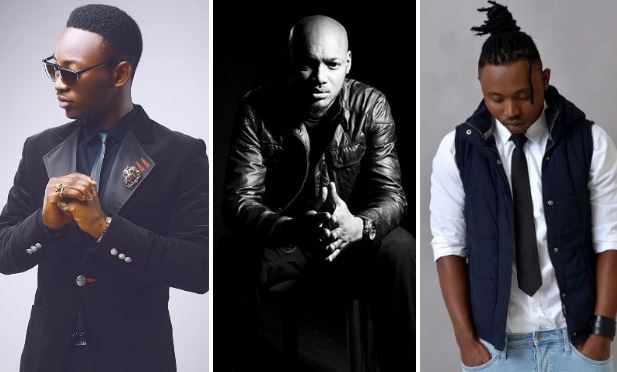 Following ongoing reports that music icon 2face kicked out pop star Dammy Krane out of Hypertek for reputation reasons and breach of contract, new information is suggesting that the earlier reported reasons may not be the cause. According to some insider, 2face pulled the plug off Dammy Krane after meeting another young artiste named Demmie Vee who is not only extremely gifted with singing, but also a prolific music producer.

I’m probably the most consistent artiste of my generation…

Demmie Vee, an Afrocentric singer is said to have been specially kept in a sort of musical “fattening room” with 2face for a while now so that he can be excellently groomed and has only recently been silently let off the reserved bench with a song and video titled “Awesome God” featuring 2baba himself. These claims were corroborated with a recent viral video which shows the artiste and 2baba in the studio in a father-and-son mood in which the African Queen crooner was said to have made him his successor.

Tuface was seen praying for him in a church photo circulating. And that is aside from the different photos of them together making the rounds online in which they are seen at different locations. It was also revealed that 2face is in love with Demmie Vee to the extent that he has been having endless studio sessions with him and they have reportedly produced not less than three tracks that will be released at an undisclosed time. It is however not too clear whether 2face’ Hypertek relationship with Demmie Vee is just on a management level or there is more to it since the artiste is believed to be signed to another label named HND (Hope Never Die) Records owned highly revered businessman, King Owomabo.

It was also revealed that not only 2ace is “mad over” the young dude. Apart from being a secret producer for some top artistes in the industry, Demmie Vee is being reportedly dragged into the studio for collabos with some of them just because of his voice. One of those industry big shots who are reportedly feeling the young dude is iconic ingenious Pop star, 9ice whom other unconfirmed sources say has done a soon to be released work with Demmie Vee.