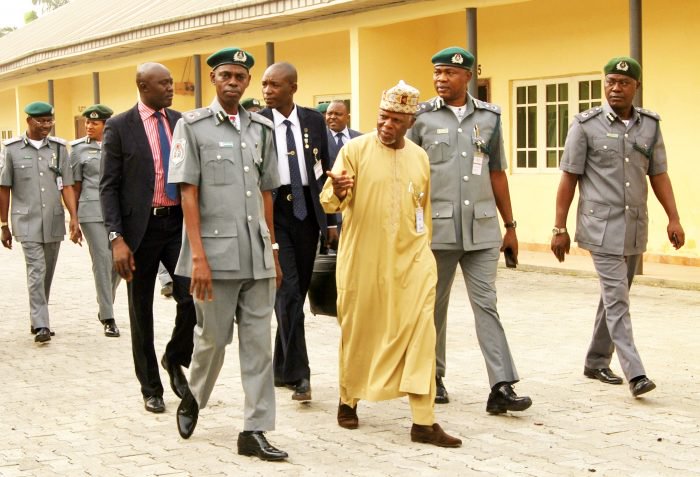 The Nigeria Customs Service generated a total sum of N239.4bn in the first three months of this year, figures obtained from the Federal Ministry of Finance have revealed. The amount is contained in a document showing the activities of the ministry in the last two years, which was sighted by our correspondent in Abuja. The NCS, according to the document, stated that its revenue performance for the first quarter of this year exceeded its target of N193.2bn by N46.2bn. This, the service added, was achieved through a reform programmed aimed at restructuring it, re-orientating its officers, removing defects and adopting simplified procedures in its activities.

Nigeria Customs nabs smuggler who strapped a bag of rice on…

The service also said it had complied with a presidential directive to deliver all seized perishable goods to the Internally Displaced Persons affected by the insurgency who are in Borno, Yobe, Adamawa and Edo camps.

It said the reforms embarked upon by the government had started yielding results as there was now strict compliance with rules governing the operations of the NCS, adding that a standard operational procedure had been developed to ensure transparency and accountability.

The NCS also said it had strengthened international engagements with the World Customs Organisation and the World Trade Organisation for trade facilitation and optimum revenue collection.

It added that a compliance team had been set up to ensure conformity with trade regulations, adding that this would help to block all illegal routes for smuggling.

The Minister of Budget and National Planning, Senator Udo Udoma, had last week said during the public presentation of the 2017 budget that although certain developments affected the realisation of projected government revenue last year, this administration was working hard to ensure increase in revenues to fund the budget.

“In terms of implementation of the budget, we are making strenuous efforts to find the resources required. We are challenging our revenue generating agencies, particularly the Federal Inland Revenue Service and the Customs to improve their efficiencies and broaden their reach so as to achieve the targets set for them in the 2017 budget,” Udoma had stated.

Nigeria among top 5 fastest growing mobile markets in the world

Help Me! Abuja lesbians are after me – Nollywood Actress, Ruth Eze cries out