17 people shot at a nightclub in Arkansas, USA 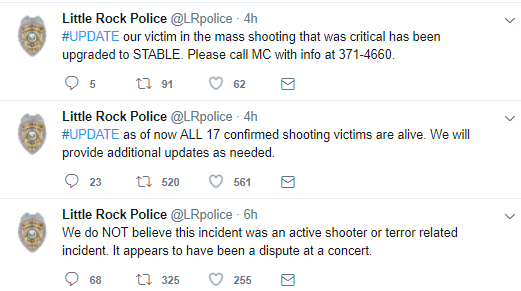 Arkansas shooting: US Police confirms that 17 people were hurt in a shooting after a dispute at a downtown Little Rock nightclub. The city’s police chief said officers suspect multiple people fired weapons but that the incident was not terror-related. The shooting happened at the Power Ultra Lounge, a club in a two-story building. Police has since cordoned off the block as crime-scene technicians gathered evidence from inside and outside the club. G

“We do NOT believe this incident was an active shooter or terror related incident. It appears to have been a dispute at a concert,” the city police said.

Little Rock Police said on Twitter that all 17 victims were alive and that one person who had been in critical condition was upgraded to stable.