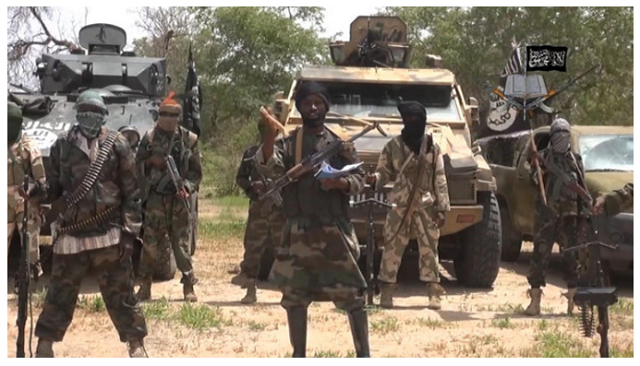 The so-called Islamic State faction of the sectarian terrorist group, Boko Haram, has claimed responsibility for the attack on a military-escorted convoy of oil exploration workers in the Chad Basin. Scores of soldiers and civilians died in the ambush. According to sources within the leadership of the insurgent group, the  Islamist terrorists did not immediately realize the composition of the convoy when they launched their attack.

Such attacks on convoy are a common occurrence in Nigeria’s beleaguered northeast zone where Boko Haram militants have been most active.

After the attack, the insurgent fighters abducted four persons contracted by the Nigerian National Petroleum Corporation (NNPC). One of their victims died from injuries he sustained during the onslaught.

In a photo obtained by SaharaReporters through a journalist with access to the two factions of Boko Haram, the abducted lecturers are seen looking terrified and seated barefoot in some unidentified indoor facility.
It is not clear whether the Islamist insurgents intend to make ransom demands in exchange for the release of their victims.

However, their decision to release the photo of those they abducted may suggest a desire to seek a negotiated settlement to free the captives