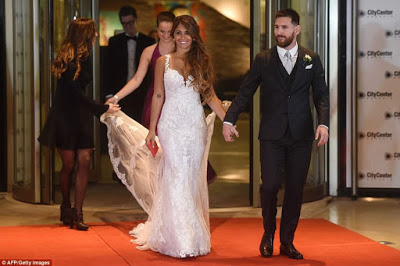 Lionel Messi’s wedding: A host of star names attended Lionel Messi’s hometown inn Rosario Argentina, for his wedding to his childhood sweetheart, Antonella Roccuzzo. However, while team-mates Luis Suarez, Neymar and Gerard Pique were among the 260 guests in attendance at the intimate ceremony, there was no invite for former bosses Pep Guardiola, most of the Argentina squad or legend Diego Maradona. According to Argentine newspaper La Nacion, Messi, invited only four of his international team-mates – Sergio Aguero, Javier Mascherano, Ezequiel Lavezzi and Angel Di Maria. The couple, who have known each other for about 25 years, banned mobile phones at the ceremony. Staff were also sworn to secrecy and 450 police officers were on hand for the big day. The couple, who now live in Barcelona, have two sons together. “I met all my baby mamas at the same time” – Diddy