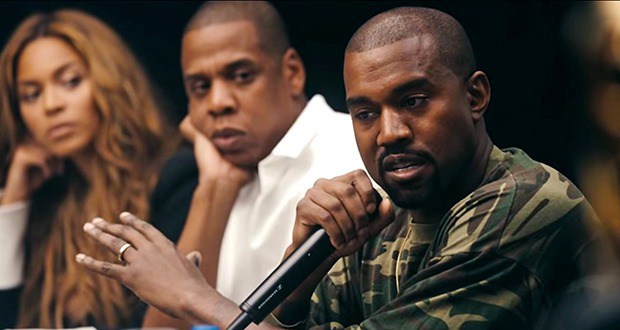 A new documentary has given an insight into the ‘epic rivalry’ between Jay Z and Kanye West. The documentary, Public Enemies: Jay Z v Kanye will look at the rise and falling out of two of the world’s most iconic popstars”. The documentary on Channel 4 features home videos, unseen footage and exclusive interviews with the people who know them best . From the preview, it appears Kanye’s marriage to Kim Kardashian could be the root of the problem with Jay Z.

When Kanye married Kim ,one of the most famous women in the world in 2014,he got huge amounts of pubic exposure which didn’t sit well with Jay Z who guarded his privacy despite being married to Beyonce. GLC, rapper and friend of Kanye revealed that Kanye’s high-profile marriage has changed him.

“The guy that I see now, that’s not the guy that we knew back then, that’s not the same person,” he said.”It does really seem like Jay-Z and Beyonce have distanced themselves from Kanye since he’s been together with Kim,” writer Julianne Escobedo Shepherd agreed.

And after Kim was robbed at gunpoint in Paris, the cracks in their relationship started to show. Then in November 2016, he launched into a 17 minute speech at the S aint Pablo Tour concert in Sacramento, California that went from praising Donald Trump to asking Jay Z not to have him assassinated. Coodie Simmons, Filmmaker and friend of Kanye said:

“I was watching it and then just I don’t even and right in the middle of it I started praying for him because something’s not right and sure enough he went to hospital after that.”

Watch Tonto Dikeh speak in tongues as she worships GOD

Nollywood actress, Liz Da-Silva reveals why she is still single