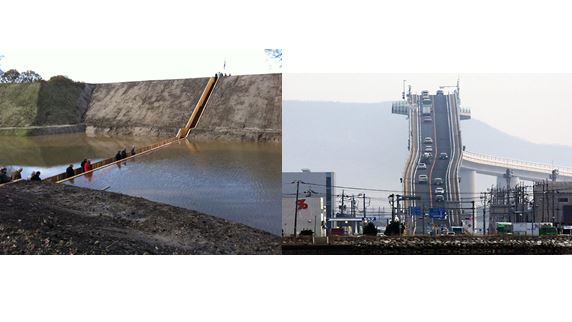 Situated above the Huangpu River, regarded as the most important river in Shanghai, the Nanpu Bridge is one of the longest cable-stayed bridges in the world. Its creation made it possible to link the highly-developed Puxi District with the far less-developed Pudong District. But what really makes it stick out is its architectural beauty. At night, its spiral approaches light up, giving it the appearance of a dragon. This feature has made it a popular tourist attraction for visitors of Shanghai.

The third largest rigid-frame bridge in the world, this structure connects several administrative regions of Japan together over Nakaumi Lake. The so-called “rollercoaster bridge” has achieved fame thanks to its deceptive appearance. While the slope’s gradient is only 6.1%, when viewed close up from certain angles, it appears that cars are driving up an impossibly steep incline.