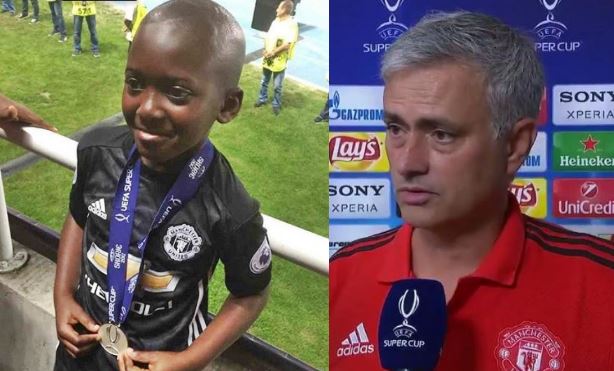 Jose Mourinho has opened up why he gave a Manchester United fan ‘the moon’ when he handed him his UEFA Super Cup runner-up medal after his team’s 2-1 defeat to Real Madrid. Portuguese tactician, Jose Mourinho has explained why he decided to give his medal to a young (Nigerian) fan after Manchester United’s UEFA Super Cup 2-1 defeat to Real Madrid on Tuesday.
United had lost out on the prize in a 2-1 defeat to Real Madrid in Skopje through goals from Casemiro and Isco, while a late strike from Red Devils striker, Romelu Lukaku kept the game competitive right to the end. The Reds boss joined his team to collect his runners-up medal on the pitch in Skopje, but promptly handed it to a delighted supporter – a boy named Deji – in the front row before departing. The Nigerian kid, Deji
When asked about the gesture in his post-match press conference, Mourinho gave an answer that prompted laughs among the many journalists present.
“Sometimes when I win, I don’t keep the medals, so imagine when I lose!” the manager said wryly. “For me, the medal would go to some place in my house; for that kid, it’s the moon, something to keep and remember. “It was a little kid with a United shirt. I have no idea where he comes from. I think it’s something he’ll never forget. I repeat: when I win, they don’t mean much, so imagine when I lose!”

Anyone know the lucky recipient? Please get in touch! #MUFC pic.twitter.com/BD3hIdtesJ