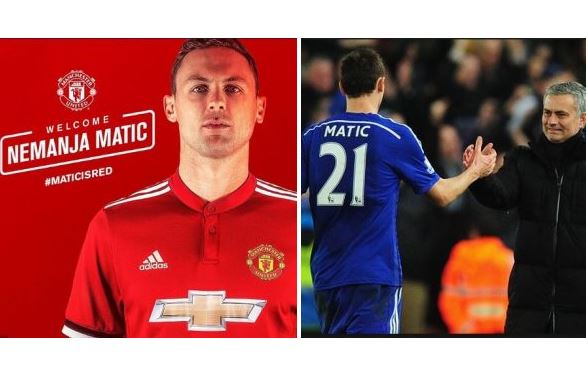 What Nemanja Matic said about Chelsea: Manchester United football club of England on Monday evening, completed the £40m transfer of Serbian midfielder, Nemanja Matic, for a fee of £40m after engaging in a long, hard negotiation battle with title rivals, Chelsea. The defensive midfielder penned a three-year deal with the Old Trafford outfit that reunites him with former Chelsea boss Jose Mourinho at Old Trafford and says his major target this season will be winning the league.

Speaking after his unveiling by the club, Matic said ;

I’m happy to be again with him at this great club. ‘When the coach was due to come to the club, this gives you more motivation, more possibility, and I will give my best to show that I deserve to be at this club and be part of this group. ‘It’s very important to come to a new club as soon as possible, to have time to adapt on your coaches wishes and on your team-mates and I’m happy I’ll have some days to train with them before the first game against Real Madrid. I’m sure that this season we can do big things. ‘As you know, probably, I didn’t train with the Chelsea team, I trained alone with a fitness coach and of course this is not the same, but I have enough time to prepare myself. I’m not 100 per cent ready but I will be very soon.

Now the two new signings. With Victor, we were together at Benfica. Lukaku, I didn’t play with him at Chelsea, but I know him because we played together many times. Both of them are great players who will help Manchester to reach our targets. When asked whether he feels Man U. can win the league this season, Matic said;

‘I think so, because the squad is more mature and have already worked with Jose for one year. I’m sure this season we can do many things. ‘It’s difficult to say (what my greatest qualities are). I’ll let the supporters talk about me. I will always give my best, but I will let supporters talk about my qualities. ‘In the defensive midfield position, the player needs to give balance to the team and try to control the game. That’s exactly what I try to do. ‘I can’t say it’s more important than any other position, but you have to know every time where is the ball and when you attack, you need to know how to stop the opponents from launching a counter-attack.

‘[Nemanja] Vidic as you know was a great player, and was one of the players who I looked to be similar to because he had a great career. He was the leader of our national team. It’s great to be in the same club as him, and I will try to do my best to repeat what he achieved here. ‘It’s going to be something special playing at Old Trafford. I’m looking forward to doing that. I feel we can do many things, and we’ll try to win the Premier League. ‘Also, anything is possible in the Champions League. United are one of the best in Europe, for sure. It’s difficult to make a plan before the season starts but we will try to win every game.

‘I missed the Champions League last year, so this competition is something special, with the best clubs in Europe, so we’re all happy that we can play in this competition again and compare ourselves with the best teams in Europe. ‘I know a couple of players here, especially [Juan] Mata because he played with me. I saw him this morning, but most of the guys I’ve played against. I think adaptation will be quick.

‘It’s going to be a great game against Real Madrid [in the Super Cup]. It’s two big clubs so it’ll be interesting game. The whole world is going to watch that. I’m happy we can compare our qualities with them, It’s going to be a hard game but I’m sure that we’re going to be ready.