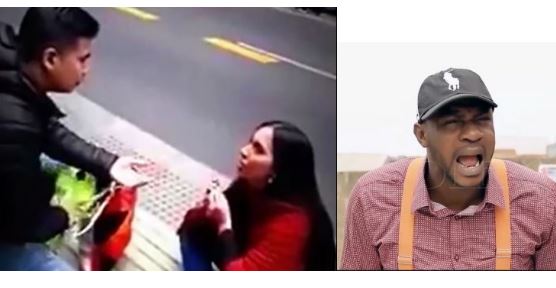 See what happened to this Lady: An inpatient woman from Chile who couldn’t wait any longer for her boyfriend to ask the big question decided to take it upon herself and it went horribly wrong. In the video below, the woman seen seated on the pavement next to her boyfriend can be heard saying ‘are you going to marry me? yes or no’ in Spanish while trying to ring him in Santiago, Chile.

‘Yes my love and stop there’ the man says as he bends down to talk to his partner as people gathered to get a glimpse of what was happening. Visibly embarrassed at the public declaration of love, her boyfriend tried to pick her up but the adamant girlfriend who wanted a more passionate acceptance from her shy partner refused.

The video ends with the boyfriend collecting his belongings and leaving her sitting on the pavement helplessly.

Watch the heartbroken video below: