Soldier stabs motorcyclist to death for shunning him in Ogun state 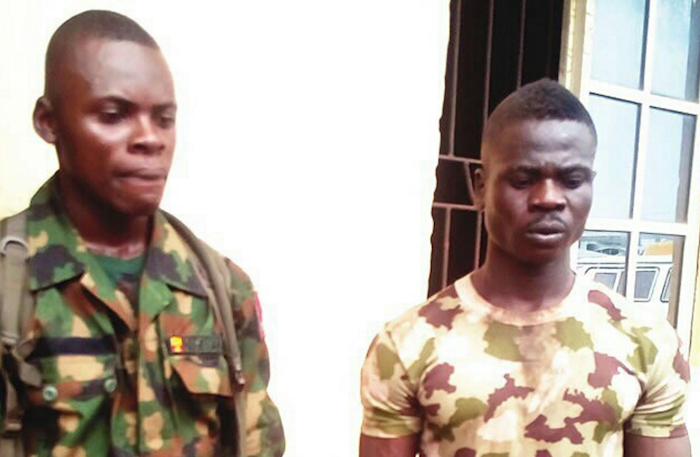 Soldier stabs motorcyclist: Abiola Odedeji has been arrested by the Ogun State police, for stabbing a bike rider, Niyi James, aka Emi-Ero, in different parts of the body. We learnt that the killer soldier had visited his girlfriend, Amada David, at Agbado Junction around 3.30pm, last Thursday, in company with his colleague, Damilare Oni. The soldiers went to the area on a power bike. It was gathered that after a short discussion, Odedeji and his girlfriend decided to go out on a motorbike. He was said to have stopped Niyi.

An eyewitness, Akinjobi, revealed that Niyi declined on the grounds that he did not have a ticket to operate in the Ijaiye area. Akinjobi said, “The soldier (Odedeji) was angry that the okada rider said no to a military man and started flogging him with a horsewhip.

Suddenly, he brought out a long knife and stabbed the man on the thigh. He also stabbed him on the waist and stomach. He was so confident that he robbed off the bloodstains on the knife on the man’s head.

He boasted that he had killed many people. He and his colleague escaped on the power bike, while the lady took another motorcycle. We quickly alerted the police.”

A team of policemen, led by the Agbado Divisional Police Officer, CSP Sunday Omonijo, immediately went after the suspects, and arrested them. Odedeji stabbed one of the policemen on the arm in the course of his arrest.

He is part of the troops deployed in Borno State to fight Boko Haram. The Ogun State Police Public Relations Officer, ASP Abimbola Oyeyemi, who confirmed the incident, said the suspects would soon be charged to court.

Sanchez will respect my decision – Wenger