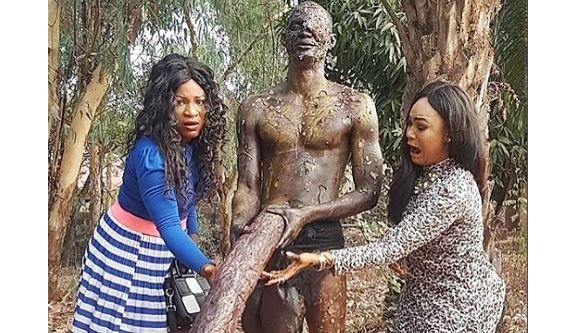 Actresses hold humongous penis: A strange man with a very massive manhood like never seen before has been captured on camera with two Nollywood actresses showing their surprise at the pondering sight. The controversial photo
The above photo of popular Nollywood actresses, Rachel Okonkwo and Destiny Etiko holding a strange man who has a humongous manhood during the shooting of an upcoming film, has caused a stir online. The controversial photo which shows the star actress popularly called Nkoli Nwa Nsukka and another film star, scarily holding the massive manhood of a strange man (actor on make-up effect) generated a lot of mixed reactions and criticisms as many doubted the position of the male organ. The photo is still making the rounds on social media as at the time of filing this report.