9 Nigerian celebrities and the American stars they resemble – You will think #1, #2 and #3 are twins (With Pics) 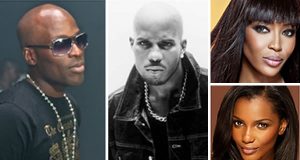 Nigerian celebrities and the American stars they resemble – It’s quite surprising that some of our Nigerian entertainment industry superstars share a striking resemblance with certain American celebrities and many people are yet to catch on to this.

1. M.I Abaga and Kendrick Lamar (Before he switched to dreadlocks)

Kendrick Lamar Duckworth known professionally as Kendrick Lamar, is an American rapper and songwriter. He embarked on his musical career as a teenager under the stage name K-Dot, releasing a mixtape that garnered local attention and led to his signing with indie record label Top Dawg Entertainment (TDE). He began to gain major recognition in 2010, after his first retail release, Overly Dedicated. Kendrick is 29 years old

Prev post1 of 9Next
Use your ← → (arrow) keys to browse
Tags: countdown postHollywoodnollywoodphotos
Share12Tweet8Pin3SendShare