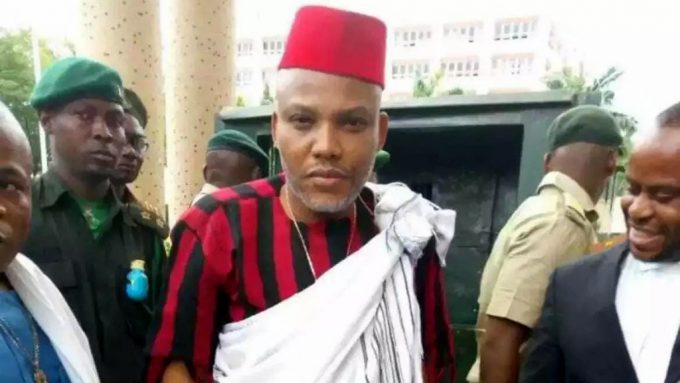 Realisation of Biafra: Nnamdi Kanu, leader of the Indigenous People of Biafra IPOB, has threatened that Nigeria will burn should he be rearrested. Recall that the Federal government last week filed an application at the Federal High Court Abuja for the revocation of Kanu’s bail. In a new interview with The Sun, Kanu said if he is re-arrested, Nigeria will burn “I don’t care! Quote me verbatim. If I’m re-arrested, this country will burn, I assure you. From where that oil money they depend on, they can no longer have access to it. I assure them that. This is not an empty threat. We’re IPOB, we don’t abandon our own” he said.

On his gain if that happened:

“Apartheid collapsed in South Africa, segregation collapsed in the USA, Martin Luther King had no weapons, the same thing is happening. There is a superior force fighting for us in heaven, Chukuokike Abiama, the Almighty God in heaven is fighting. This is His battle, it is not Nnamdi Kanu or IPOB’s battle. God is fighting His battle for us. Have you ever heard of earthquake in Nigeria? It happened in 2016 in the North when I was arrested; have you heard of locusts swarming everywhere and damaging crops before? These are plagues of biblical proportion and it is just a warning, a tester of what is to come. What I represent is greater than who I am and the God that we worship, Chukuokike Abiama is about to make manifest that the whole world may know that Biafra is very special, exceptionally special and there is nothing any man can do, absolutely nothing”.

Kanu maintained that it is President Buhari and the DG of the DSS that should be arrested for repeatedly denying him bail when the courts granted him bail previously.

“Are you talking about an illegal and unconstitutional bail condition? A bail condition designed to emasculate and basically render IPOB impotent? Does anyone seriously think I’m going to stand for IPOB to be rendered desolate? I can’t allow that to happen, I have not violated any laws unknown to the Nigerian judicial establishment. I have not committed any offence; no crime whatsoever. I said no crime. It is a violation of my right to ask me not to speak; to ask me not to be in a congregation of not more than 10 people, an absolute violation of articles enshrined in the constitution that I expect all and sundry to be rising up in defence of, not trying to justify the erosion of my fundamental human rights to speak, to be heard and to associate. President Muhammadu Buhari was the one who broke the laws, he disobeyed the direct court order to release me unconditionally, not once, but twice. Honourable Shuaibu of Wuse Magistrate Court granted me bail, Buhari did not release me. Hon Justice Ademola granted me unconditional bail, Buhari and his cousin, Lawal Daura refused to honour that court order. They are the ones who should be detained for flagrant disobedience to court orders. I want the northern Arewa irredentists to call for the arrest of Buhari and Daura for flouting court order after court order, asking for my release. It smacks of hypocrisy and absolute cowardice that people who could not rise up in defence of the law when a court made a judicial pronouncement are now clamouring for my arrest because they believe it is easy to do so. Before now, Nnamdi Kanu is Igbo, he is a Biafran and can be arrested and nothing will happen but that would not be anymore, it would no longer happen” he said

Kanu who has a son he has never met said he is ready to sacrifice his family for the realization of Biafra.

“I will sacrifice anything including my family to ensure that Biafra is restored. Any obstacle on my way will be obliterated. I’m not asking for Sokoto; I’m not asking for Kaduna, or Borno, I said this very land where my progenitors raised us; the land of our ancestors; of over 5, 000 years old, this land must be free, absolutely free, I assure you of that. The way we were before the whiteman came; had the white man not come, I would have no relationship with Sokoto, non whatsoever. The whiteman is not God, only God can create a nation, Lord Luguard is not God, only God can create a nation. I can tell you the day Nigeria was created even till the exact second and hour, but you can’t tell me when Biafra was created. It came as a result of organic interaction of cultures and value systems and traditions fussed into one to make Biafra a possibility, that is how nations emerge. By the collision of commonalities and value systems, not one idiot somewhere pontificating and dictating to us who should be in a country or not. Other African people can accept it, Nnamdi kanu cannot accept that. The whiteman is not God and cannot create a country for me. Have Nigerians sat round the table to say we have agreed that our name is Nigeria? We want to live together; perhaps, there will be a strong argument against what I’m proposing. Right now, what we are seeking to do is go back to where we were before 1914. From there, we can then begin to negotiate and discuss”.