Lady exposes married pastor who got her pregnant and abandoned her, shares screenshots 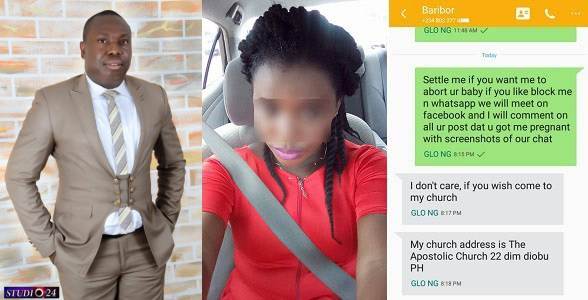 A Lady, Claire has written to us to expose a married man who is also a pastor, who allegedly got her pregnant, and abandoned her.

Bryan Okwara and partner Marie Miller announce they are…

I want to expose a pastor who is also a married man for his infidelity. He lied to me that he is not married only for me to get pregnant and he abandoned me, blocked me on all the social media and said he doesn’t want to have anything to do with me

Below are screenshots of when the going was good… and how they met at an hotel, and did the “deed”.

When she discovered she was pregnant, and then she got blocked by Baribor:

Their conversation via SMS when she threatened to expose him on Social Media:

Now, it’s worthy to note that we put a call through to Baribor’s number, and He didn’t deny dating Claire.. in his words, he told our reporter: “Yes, I dated her, she was my girlfriend.. Young Man, Tell Her to Do Her Worst. I won’t change my phone number”…