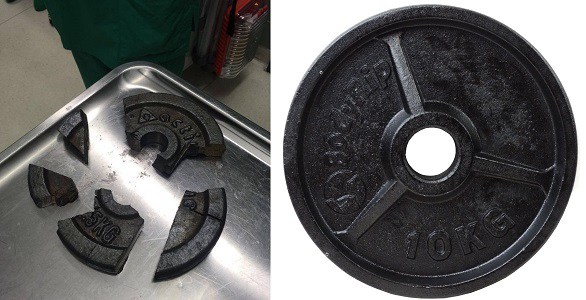 So, a man might have taken his passion for “gyming” too far, when he got his genitals stuck in the centre hole of a gym plate while trying to “strengthen his manhood”. Firefighters posted a warning to others after they were called to a hospital to free a man who had trapped his penis in the hole at the centre of a gym weight plate on Friday. He was reportedly trying to strengthen his penis by using it to lift the 2.5kg disc.

Villagers build massive statue of a manhood, explain the…

OMG! Man runs out of hotel naked after girlfriend chopped… he crew in Worms, Germany, posted a picture of the broken weight on their Facebook page, issuing a warning to men not to try to copy the idiotic move.

“A message of a somewhat different kind was received on Friday morning, 15.09.2017, at the control centre.

“One person had a very sensitive part of the body trapped in the hole of a 2,5 kg-dumbbell disc.

“With the help of a cutting grinder, a vibrating saw and a hydraulic rescue device, the dumbbell weight could be removed after three hours.””Please do not imitate such actions!”