A nanny is facing charges of attempted murder in Namibia after she was allegedly caught on camera violently throwing a baby into a cot. Scroll down to watch the graphic video. VIEWER’S DISCRETION IS ADVISED.

The child’s mother, Annemarie Theron had set up a hidden camera in her home after she noticed bruises on her nine-month-old daughter Laila’s neck, shoulders and under her feet. Laila had been in the care of her nanny since May this year. Footage captured by the camera appears to show the family’s nanny manhandling the tot, tossing her into her cot like a rag doll. Devastated mum Annemarie told news websites Netwerk24 & Rekord:

“It was very emotional watching it. I refused to sleep, eat or drink for a couple of days afterward.

“It’s difficult to imagine how long this has been going on for. I can see Laila is so, so broken after everything.

“In July, I had noticed some marks under Laila’s feet but never suspected our nanny. In August, I noticed my baby had marks on her arms and neck.
“This was when I started to monitor the situation closely.

In the beginning of September, my husband, Johan was home for two days. He told me that Laila feared our nanny.”

Hence, the Theron family decided to install cameras.
Last week, Annemarie noticed that Laila had an egg-shaped bump on her forehead and her eyes were swollen from crying.

“The nanny told us that she fell out of her walker. If she was crying that badly, why did she not phone me?”

A friend assisted Annemarie in downloading an application that allowed her to see the footage from her phone. Annemarie and her husband Johan informed police and the nanny was arrested on Friday. She appeared in court on Monday to face charges of child abuse, assault and attempted murder. She was denied bail and remanded in custody until October.

Annemarie told RekordEast.co.za that the nanny requested a visit from her.

“My response was that I had a duty as mother to look after my children. I told her that I could not forgive her.” 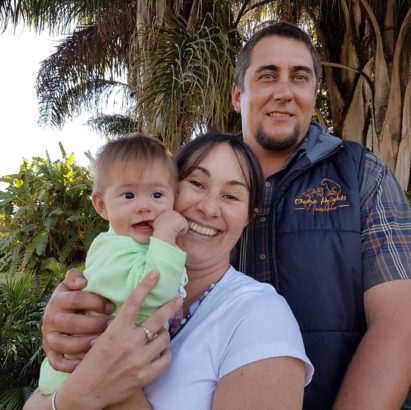