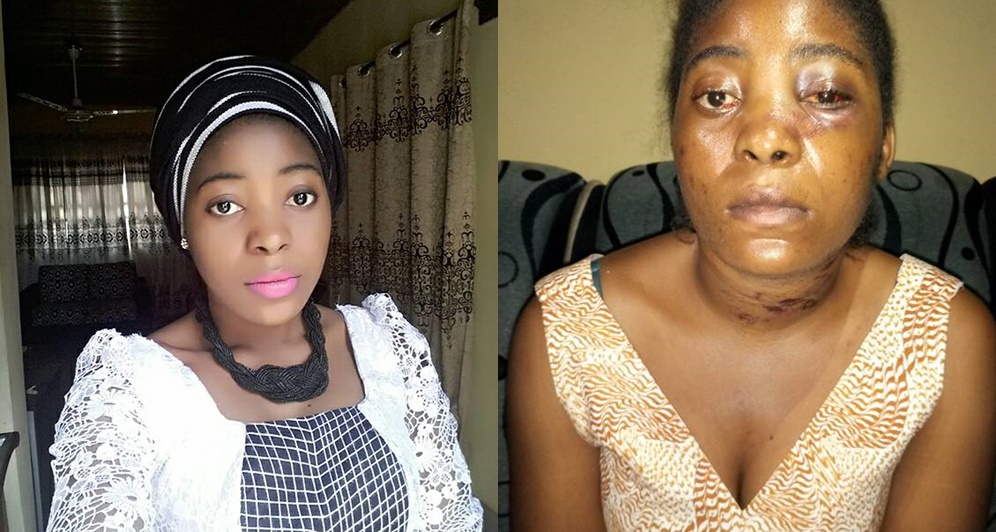 Below is a true story how a woman identified as Patience Bula was allegedly almost killed by a movie director, Adams Marvin under the guise of an expensive movie role in Benue state. According to a Facebbok user, Ukan Kurugh, the suspect has been arrested and is currently in police custody but will soon be released because of he ‘Knows’ people.

The painful experience of this beautiful new wife must be told. She was caught in between the claws of death, perhaps for ritual purposes or for something else, one should wonder. I have urged the world over and those who believe in the cause of justice to show up at the Police A Division Wadata-Makurdi this morning by 9am for the perseverance on the cause of right. I would tell those who would care to read.

Mrs. Patience Bula (tiv girl) who is a graduate of Mass Communication and a corp member currently serving at Radio Benue Makurdi was invited by a friend (Precious), an Igbo Lady and also fellow corper after their CDS to show up at a movie rehearsal she was taking part in and to perhaps also pick a simple role. A thing she succumbed to after some persuasion. There she was introduced to one Adams Marvin (idoma boy) who was the one managing the shooting of the movie and was subsequently attached a simple role and handed the scripts.

Subsequently, she was asked to bring the script as it contained some roles of other artists, a thing she did voluntarily at the Eunice Resort Centre, venue of the rehearsal where she had been offered the role.

On Sunday, 10th September, 2017 the said Marvins called Patience that, there was need to cut down participating actors in the movie to save cost, hence the production team was short of finance. He therefore urged Patience to meet him at Hope Clinic, Wadata, where other actors and actresses were waiting to be shortlisted. On getting at the clinic, Patience saw no one and Marvins appeared minutes later to tell her that, all the people were gathered in a house down the street opposite the hospital. Not convinced enough thou, she decided to make the walk down into a compound and then into a supposed room where there was no one.

He urged her to sit and then told her that, there was a scramble for roles and so she should pray that she would not be thrown out. In the process, he also sat on same bed and bent backwards as if in a bid to pick something and next she experienced was a stick held at either ends across her neck in front in a bid to strangle her. She started struggling and screaming for help which didn’t come. It became a scramble that lasted minutes. She was determined not to die like a chicken and struggled until the stick was loosed. Rather, he used the stick to hit her chest and wipe her back until she became unconscious hence she had become weak. Only to wake minutes later with fumes on her mouth in a pool of blood alone in the room. She crawled to the door step where a boy came over to help her to lie on the corridor.

The scene attracted sympathizers and some of the compound neighbour’s who had earlier failed to turn up, perhaps fearing the nature of the maverick Marvin in question. It was in the midst of all this that Marvin showed up, perhaps believing she must have been dead. Surprised to see her awake, he started claiming it she was her girlfriend who came and in the process of love-making started convulsing. It was so unbelievable and a youth leader who showed up helped recover her phone from the said room that had by now been switched off though initially fully charged. All this had taken place about 2:30pm and Patience husband was later reached who showed up and almost shed tears for what his wife had went through.

The youth within the area dragged the culprit to the police station where he is under lock and key. Patience was first taken to a clinic that asked for consultation of N17,000 and so they left for FMC Makurdi where doctors where on strike and so she was taken to the FMC Apir, where she underwent series of tests and some are yet to be done. On a visit to the police station yesterday, husband to Patience, Mike Bula lamented that, the police at the station were treating the recidivist, who already has a plethora of cases against him was all smiles and claiming that he knows his way. There was no sign of remorse as he is reputed to have a smooth rapport with the policemen in the said A division station, Wadata, Makurdi.

Fellow Nigerians, humanitarian, activists, feminist, gender activists, groups and organizations please let’s ensure justice for this sister of ours against this monster-killer.

We must stand up against evil with a voice.

Top Post: Real facts about Rita Dominic you never knew – #4 and #8 will knock you out (With Photos)