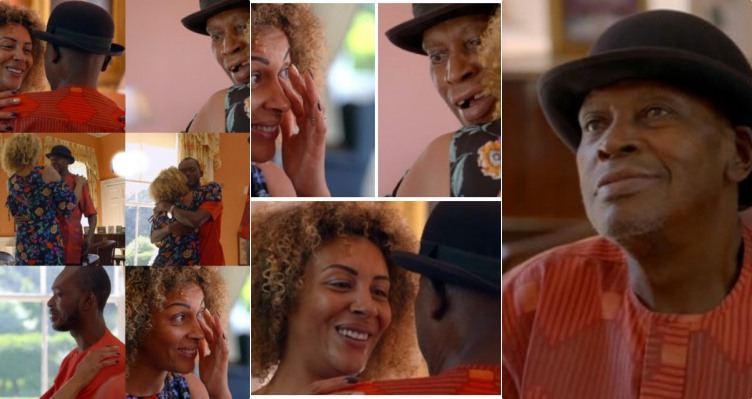 Long Lost Family proved to be a real tear-jerker tonight after a Nigerian father collapsed and threw his first meeting with his 39-year-old daughter into jeopardy. Laura Aker, who grew up in Kirkcaldy in Scotland, needed to know why her father Andrew Olum Ekpang abandoned her after meeting her mother while training for the Navy. The mother-of-three discovered that the man she called dad was not her real father as a teenager, before being shown a letter where Andy promised to return.

He revealed that he knew from birth about Laura and that she had always been important to Andy, but financial constraints meant he couldn’t see her.

Andy was “very elated” to see his daughter for the first time, but tragedy struck when he collapsed a week before he was due to travel and was taken to hospital.

It was touch and go whether he would be able to fly, but fortunately after three weeks his doctor gave him the all clear to fly over to meet his daughter.

Andy arrived at the airport with his walking stick beside his son Ntem.

Speaking to Nicky, he said:

“I had to [make it] and it is really wonderful and great.”

“I felt terribly happy and thanked my God that my daughter had been looking for me. I have always been thinking about her.

“It’s sad. There are moments I sit round with my children and Laura is not there.”

Laura broke down in tears after Davina McCall told her that her dad has been found and was ‘thrilled’ to see her – before letting her know she has 12 siblings.

They finally shared a hug during an emotional meeting at a hotel where Laura and her dad said they loved each other.

Ntem broke down in tears of happiness and admitted his half-sister “meant so much” to them.

“I just felt a connection straight away. When my dad said he loved me it was everything I hoped for. Now I feel not only part of my family in Scotland but also part of my massive family in Nigeria.”