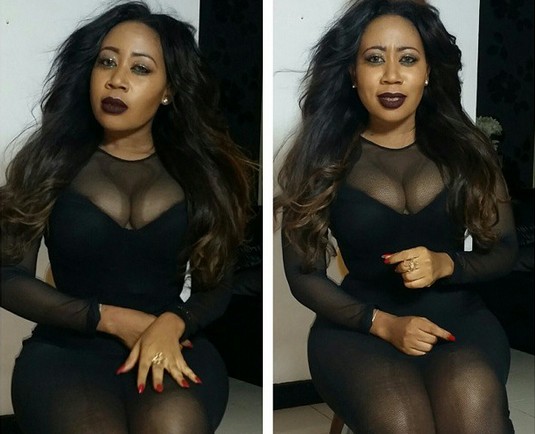 Curvy Nollywood actress, Moyo Lawal, who is quite playful on social media, has made an interesting confession about her boobs. Recently, the thespian decided to go a bit naughty by sharing a picture that almost brought out her milk factory to the delight of her fans. Everyone noticed how unequal the size of her mammary glands was and she was called out to clear the air about it. Unashamed Moyo was quick to respond by affirming that truly one of her boobs is bigger than the other, as they are just natural.

“Nothing wrong with a good girl having a naughty side,” she once said of herself, and one wouldn’t blame people so much when they get over their heads in making stuff out of some things she had said. The story of her suicide attempt is still very fresh, even though the Lagos-born emerald-eyed star debunked it all, saying she would never attempt to kill herself because she’s having a good life. Who can doubt that? Everything for her is on the up and up, with her career adrift on the launching pad to get her anywhere her minds can reach.

So it was nothing strange when a certain person named Candyberry waltzed into her Instagram handle to comment on her boobs-toting picture, observing that one of her boobs is bigger than the other. The actress took it in with her usual coolness and fixed her real good.

“ It’s a bit disturbing that a girl will look that closely…but moving on..Hun, my boobs are natural, one is bigger and higher than the other,” she replied the curious Candyberry. However, on further probing Potpourri asked the actress if it is true that one of her boobs is bigger than  the other. “ Yes, one is always bigger than the other. It is so for every woman who hasn’t gone under the knife. Only the artificial boobs can be of the same size,” she replied.

“Tacha gifted herself the ₦10m for her birthday, it wasn’t…