Teen couple suspended after marriage proposal at their high school 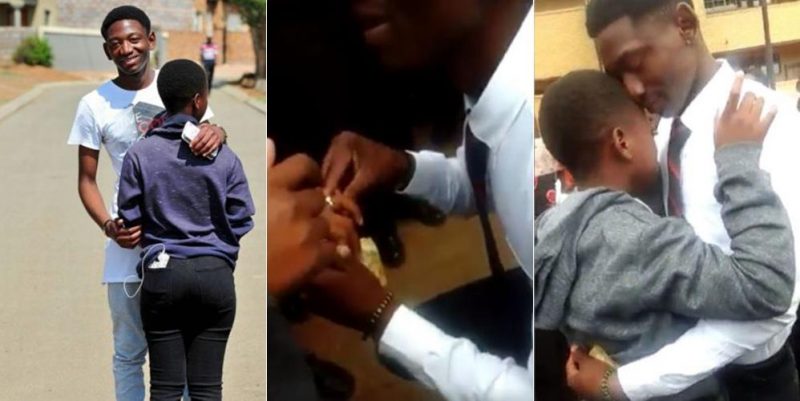 The teen couple Mduduzi Tlou, 18 and his 16 years old girlfriend who got engaged last week in front of fellow students have been suspended. 18 Years old Tlou had proposed to his underage girlfriend at Tholulwazi Secondary School in Tsakane Ekurhuleni, in front of cheering fellow pupils, with a R2000 ring which was just confiscated.

The pupils yesterday appeared before a school disciplinary hearing. Tlou told Sowetan that they had been dating for eight months. He said he wanted to marry her because she had “changed” his life.

“I love her because when I met her, I was an alcoholic and she had changed all of that.

The Grade 11 pupil said marriage, however, was not on the cards for another two years.

He said he did not know the proposal was against school policy.

“I was surprised on September 18 just after lunch when they called us into the principal’s office, confiscated the ring and asked us to bring our parents the next day.”

“When they took my ring at school, I wanted to cry. He asked me to marry him and make him the happiest man on earth. We are not going to get married now. We will get married after we both finish school,” she said. The couple’s parents said they were elated by the proposal, however, they were worried by the pupils’ suspension.

“Why is this relationship being turned into a crime? He must marry her. I will even give him my savings for lobola.”

The girl’s mother, Nomsa, said: “I am happy with the step these children are taking. Mduduzi is a good boy. I can’t think of a better son-in-law.” Gauteng education spokesman Steve Mabona said the pupils acted indecently by kissing and touching in front of their schoolmates.

“Surely such behaviour will not be tolerated in our schooling environment. A school is an institution of learning . The disciplinary process by the SGB . will pave a way forward.” The pupils would be given a chance to write the tests missed, he said.