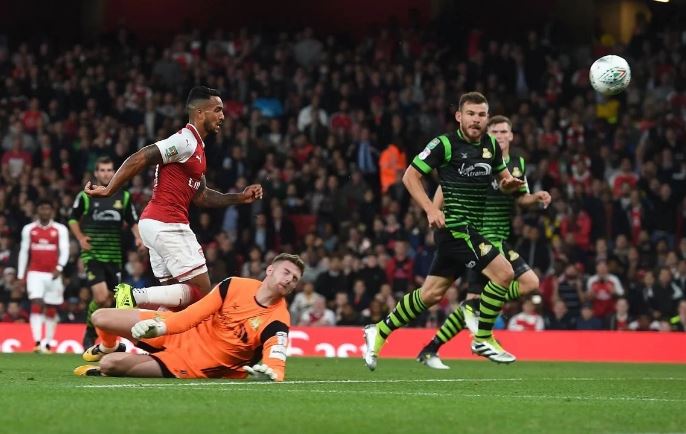 Arsenal advanced to the fourth round of the Carabao Cup otherwise known as EFL Cup as Theo Walcott’s goal proved enough to overcome League one Doncaster Rovers. The Gunners were in command all through the 90 minutes but have only Theo Walcott’s goal in the 25th minute to show for their superiority. On the back of a 0-0 draw against Chelsea over the weekend, the hosts could have taken an early lead after Oliver Giroud rattled the cross bar from a beautiful bicycle kick.

However, the goal came some minutes later as England star Walcott brilliantly brought down a great pass from Sanchez, before coolly slotting home. But despite efforts from the Gunners to increase their tally, Doncaster held on to leave the Emirates with their heads high. The league one team is managed by Darren Ferguson, son to former Man United coach Alex Ferguson.

Ferguson looking sad from the stands after Arsenal win over Doncaster in the EFL cup. Photo: UK Sun

It was also a night of record for Arsenal as the Gunners recorded their lowest ever Emirates Stadium attendance during their with Doncaster Rovers. It was gathered that only 44,064 “tickets were issued” for the third round meeting with the League One club, although many in attendance felt that the actual figure inside the ground was lower than that, with around 5,500 Doncaster fans among that number. The attendance beat the previous lowest at the Emirates for a competitive Arsenal first team game – the 46,539 fans who came along for the League Cup clash with Shrewsbury Town, exactly six years ago to the day of the Doncaster game.